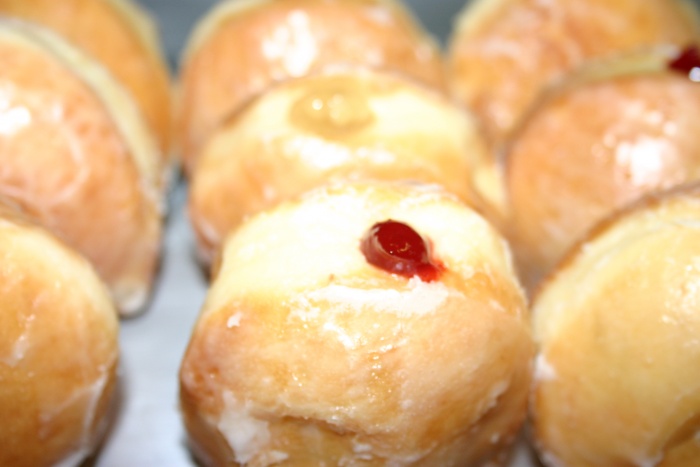 On Chanuka, there is a prevalent custom to eat foods that are fried in oil, such as latkes and sufganiyot (jelly donuts). The common reason for this popular custom is that oily food serves as a remembrance of the miracle of the “pach shemen”.[2] Another reason that is offered is specific to the custom of eating sufganiyot. After the Greeks desecrated the stones of the mizbe’ach, we were unable to reinstall them.[3] In remembrance of the desecration of these stones, we eat a food upon which we can recite “al hamichya” because in its recitation we ask Hashem to have mercy “al mizbachecha” – on the stones of His mizbe’ach.[4]

It is important to clarify that this article refers specifically to donuts made from yeast dough and not from cake dough.[5] Yeast jelly donuts start off as thick dough balls that are formed from a mixture of flour, water, sugar, eggs, shortening, salt and possibly other ingredients. The dough is then deep fried for approximately 5-7 minutes. The fried dough is not baked thereafter. After the fried donut has cooled down, a choice of jelly, caramel or chocolate can be inserted by a type of syringe.

How does halacha view the jelly donut? Is it considered to be a type of pas (bread product) – because it is made from dough of the five species of grain, i.e. wheat, barley, rye, oats and spelt, or is it considered to be a tavshil (cooked dish) because it is deep fried[6] and not baked? The answer to this question has a profound impact on the application of three areas of halacha as they pertain to jelly donuts; hafrashas challah, brachos and bishul akum.

Any dough[7] (bread, cookie[8] or cake) mixture, consisting of one or more of the five grains, in the amount of approximately 2.5 lb of flour (for separating without a bracha) and 5 lb of flour (for separating with a bracha) is subject to hafrashas challah. One should recite the bracha (“v’tzivanu l’hafrish challah min ha’eesa”), separate a piece of dough[9] from this larger mixture and proclaim “haray ze challah” (this is challah). The small piece is wrapped in silver foil and placed into an oven to be burnt.

The Torah refers to challah as a mitzvah that applies to “lechem ha’aretz” (bread of the Earth).[10] Accordingly, the obligation to separate challah will only apply to dough mixtures that can be considered lechem.[11] When dough is cooked or fried, the end product cannot be considered lechem.[12] As such, some argue that dough that is destined to be cooked is exempt from hafrashas challah.[13] Others maintain that even though the dough is eventually cooked, the obligation to separate challah applies at the kneading stage at which point the dough can still be considered lechem.[14] Shulchan Aruch follows the lenient opinion and does not require hafrashas challah from such dough.[15] The Shach suggests that, because the question is the subject of a debate, one be stringent and separate challah but without a bracha.[16] Accordingly, it is recommended that one be stringent and separate challah from the dough used for jelly donuts without reciting a bracha.[17]

What bracha is recited on a product made from thick dough which is cooked instead of baked? All agree that if the dough does not resemble a bread-like product (to’ar lechem) then its bracha is mezonos.[18] An example of this kind of product is pasta. But if the cooked dough does retain to’ar lechem then its bracha is subject to a dispute. Some argue that only baked dough is ha’motzee whereas cooked dough is mezonos.[19] Others disagree and maintain that since the product retains to’ar lechem, the proper bracha is still ha’motzee.[20] Because of this doubt, Shulchan Aruch recommends that a G-d fearing Jew consume a cooked dough product only during a meal at which he has already recited ha’motzee on regular bread.[21] The common custom follows the first opinion which dictates that the bracha is mezonos.[22]

The aforementioned dispute applies to jelly donuts with one caveat. Jelly donuts cannot be considered regular pas because they are made from sweet dough. Instead, they are considered pas habah b’kisnin.[23] The bracha on pas habah b’kisnin is mezonos unless one is koveah seudah, in which case the bracha would be ha’motzee.[24] Regardless, since the custom follows the first opinion above, the bracha on jelly donuts is mezonos, even if one is koveah seuda.

Bishul Akum refers to a tavshil (cooked dish) that is cooked by an akum[25] with no Jewish involvement.[26] Such food is rendered non-kosher. This applies even if the akum is a professional chef and is cooking food for the sole purpose of selling it, such as a restaurateur. In contrast, one is permitted to consume bread baked by a palter (a gentile baker).[27] The leniency of palter was applied to pas because of its integral importance to our diet and incorporates any product whose bracha could be ha’motzee in a given circumstance. This would include any type of pas and even pas habah b’kisnin.[28]

If jelly donuts are to be considered pas, then it would be permitted to consume them even if they were fried by a palter. But if they are to be considered a tavshil, then consumption would seemingly not be permitted. It is clear from the above discussion that the halacha prefers the opinion which considers jelly donuts to be a tavshil. Nonetheless, since bishul akum is of rabbinic origin, there may be grounds to follow a lenient opinion.[29] Furthermore, some argue that jelly donuts are exempt from the prohibition of bishul akum as they are not olah al shulchan melachim[30] (would not be served at a king’s table).[31] Therefore, they would be permitted even if fried by an akum.

[1] It is always advisable to consult with your Rav for questions of psak halacha.

[5] Donuts from cake dough are generally made from a liquid batter – a belila raka – and the baked product has a different texture.

[6] Deep frying is a halachic equivalent of cooking.

[7] Batters that are very soft and can be poured as a liquid (i.e. cake batters) are not subject to hafrashas challah unless there is more than 2.5 lbs. of connected dough (a large honey cake) after it is baked. In this situation, challah is taken from the cake.

[8] Cookie batters are subject to hafrashas challah even if there is no water in the dough or batter. In this case, challah is taken without a bracha.

[9] The custom is to separate dough the size of a k’zayis.

[11] Shulchan Aruch, YD [329:1]. Shulchan Aruch explains that “sufganin” is exempt from hafrashas challah since it is a belila raka which is then cooked – it is therefore not considered to be lechem. “Sufganin” seems to be similar to today’s cake donut.

[14] Rabbeinu Tam, Pesachim [37:] s.v. “d’kuli alma“. All agree that if at the time of kneading the intention is to bake the dough, then it is subject to hafrashas challah even if it eventually is cooked instead of baked. See Shulchan Aruch [329:3]

[22] Rama [ibid.] It is clear from Mishna Berura [75] that the ikar halacha follows this opinion even when there is a safek d’oraysa.

[25] There is a dispute amongst the Poskim as to whether this principle applies to a Yisroel mumar. See Pischei Teshuva, YD [113:1]

[26] The definition of Jewish involvement is beyond the scope of this article.

[27] See Rama YD [112:2] who is lenient even in situations where bread baked by a Jewish person is available. See also Shach [9] who cites the custom to be stringent during the Aseres Y’mei Teshuva. Shach advises that, wherever possible, one be stringent even during the rest of the year unless the pas palter is of better quality.

[30] OU Policy Document A-105 discusses this reasoning as a potential heter for donuts.

[31] See Shulchan Aruch YD [113:1]. The parameters of olah al shulchan melachim are beyond the scope of this article.