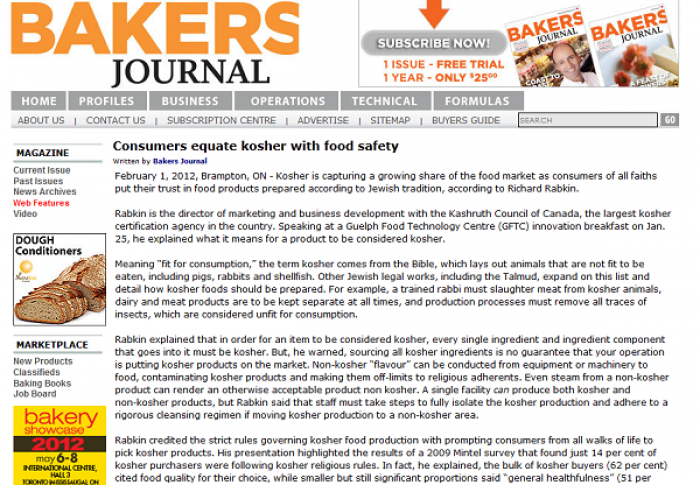 February 1, 2012, Brampton, ON – Kosher is capturing a growing share of the food market as consumers of all faiths put their trust in food products prepared according to Jewish tradition, according to Richard Rabkin.

Rabkin is the director of marketing and business development with the Kashruth Council of Canada, the largest kosher certification agency in the country. Speaking at a Guelph Food Technology Centre (GFTC) innovation breakfast on Jan. 25, he explained what it means for a product to be considered kosher.

Meaning “fit for consumption,” the term kosher comes from the Bible, which lays out animals that are not fit to be eaten, including pigs, rabbits and shellfish. Other Jewish legal works, including the Talmud, expand on this list and detail how kosher foods should be prepared. For example, a trained rabbi must slaughter meat from kosher animals, dairy and meat products are to be kept separate at all times, and production processes must remove all traces of insects, which are considered unfit for consumption.

Rabkin credited the strict rules governing kosher food production with prompting consumers from all walks of life to pick kosher products. His presentation highlighted the results of a 2009 Mintel survey that found just 14 per cent of kosher purchasers were following kosher religious rules. In fact, he explained, the bulk of kosher buyers (62 per cent) cited food quality for their choice, while smaller but still significant proportions said “general healthfulness” (51 per cent) and food safety (34 per cent) drove their purchasing decisions.

Also of note, Rabkin highlighted that a full 10 per cent of kosher purchasers adhere to other religious restrictions similar to those kosher imposes. Halal followers in particular tend to purchase kosher products, although this choice doesn’t run both ways. According to Rabkin, many consumers picking kosher products for religious reasons tend to shy away from halal products due to their less stringent rules around cleaning procedures.