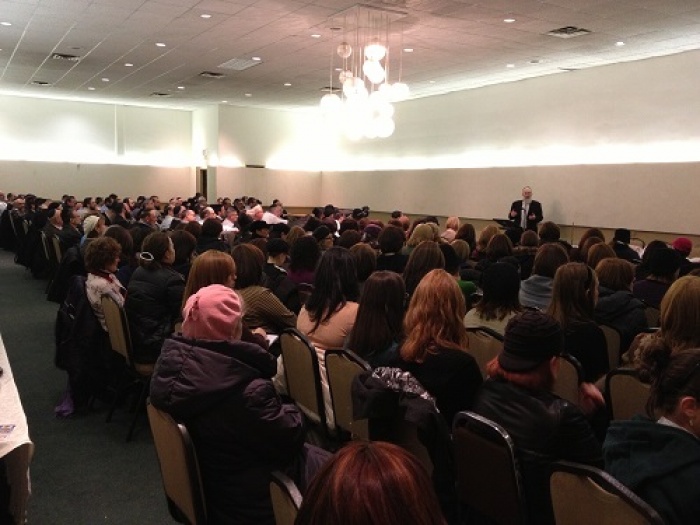 This year, COR was honored to host Rabbi Dovid Heber of Star-K Baltimore who informed and entertained with a shiur titled “Kosher for Passover: Not what it Used to be!”, while Rabbi Yehuda Simes of Ottawa Hillel Academy inspired others to tackle life’s challenges as he did after a tragic accident left him paralyzed.

Rabbi Heber discussed selling chometz and told an amusing anecdote about a time when the Star-K sold their chometz to a Non Jew who was later discovered to be married to a Jewish woman. One night during chol hamoed, Rabbi Moshe Heinemann (Rabbinic Administrator of Star-K) awoke in a panic- what if this person dies during Pesach and all of his possessions are transferred to his Jewish wife or his Jewish children?? When asked what he did to rectify the situation, Rabbi Heinemann responded “I davened all week that he shouldn’t die!!”

Rabbi Heber enumerated some foods do not require special kosher for Pesach hashgacha. Packaged meat (with no additives) purchased before Pesach may be used during Pesach. If the meat was in the freezer with chometz, the plastic packaging should be rinsed thoroughly. While eggs are kosher for Pesach, they should be purchased before Pesach. If needed, one may look at the date coding on the egg carton and if packaged prior to Pesach, the purchase can be done during Pesach.

Following Rabbi Heber’s address, Rabbi Simes recounted his harrowing experience to the packed auditorium. Three years ago he was in the car with his wife and children when a deer appeared in the middle of the road. Rabbi Simes’ wife swerved to avoid the animal, causing the family van to spiral out of control. Miraculously, none of the 7 Simes children or Rabbi Simes’ pregnant wife Shaindel were seriously hurt. Tragically, Rabbi Simes was left paralyzed. “I must have crushed my spinal cord,” Rabbi Simes recalls.

Rabbi Simes reflected on his “accident” – although he does not view it that way. “I don’t look at it as an accident at all,” Rabbi Simes told the audience. “If this didn’t happen to me, I wouldn’t have had the honor of addressing an audience of 300 friends like you at this COR community lecture.”

Rabbi Simes is now grateful for the “little things” such as breathing and swallowing. “I have now come to appreciate the great bracha of swallowing.” When Rabbi Simes was finally able to swallow they brought him a slurpee, his favorite, and the family celebrated.

A few months after the accident, Rabbi Simes’ wife gave birth to their 9th child in the same hospital where Rabbi Simes was recovering. “I was wheeled into the room and they gave me the baby… it was just a river of tears.”

When asked is there is hope for the future (further recovery), Rabbi Simes responded: “Hope? Of course there is hope, and even certainty that I will be able to live my life to the fullest potential, whatever that may mean.”