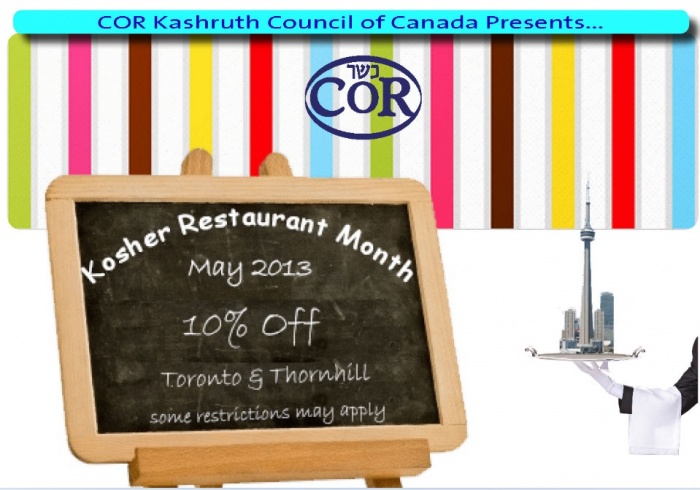 May was “Kosher Restaurant Month” in the Greater Toronto Area, where 34 participating COR certified kosher restaurants offered 10% off their regular menus to encourage consumers to come out and support their local kosher eateries.

Kosher Restaurant Month was the initiative of COR-Kashruth Council of Canada, Canada’s largest kosher certification agency. According to Richard Rabkin, COR’s Director of Marketing and Business Development, the motive behind the promotion was to do whatever they could do help their COR certified proprietors. “We know that the restaurant business is competitive – some statistics show that 90% of non kosher restaurants close within their first three years of operation. So we started brainstorming to see if there were any ways that we at COR – Kashruth Council of Canada could help our valued proprietors increase their businesses, and the result was Kosher Restaurant Month.”

The event was an unmitigated success and grabbed media attention, including local Jewish publications as well as wider media outlets including the Toronto Star, Metro, and Dine.TO among others. This resulted in kosher restaurants being promoted to consumers who may have not been familiar with them at all.

“There’s no question that COR’s Kosher Restaurant Month drove people into our restaurant that I’ve never seen before,” said Arthur Batikian, manager of Bistro Grande. “We’re hopeful that some of those new customers will end up becoming regulars.”

“The promotion was very well advertised and a lot of people were using the coupon” said Armando Cohen, owner of D-Lites in Thornhill, who called the COR office specifically to express his appreciation for the promotion. “It created a buzz in our restaurant; I would love to see another event like this in the future.”

Commenting on the fact that COR took the initiative to put together Kosher Restaurant Month, Sason Haba, owner of Dr. Laffa, summed things up nicely, saying, “What other kashrut agency would do this for their certified restaurants?”