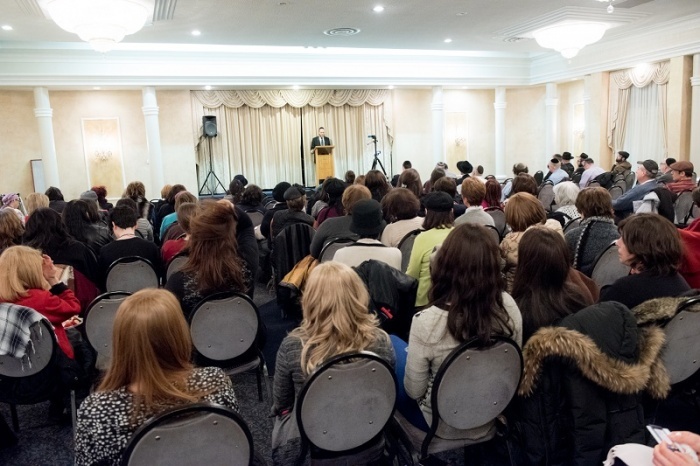 “It was really nice to see the diverse crowd,” commentedRabbi Oziel, as the audience was made up of a wide cross section of TorontoJews – Sephardim and Ashkenzim, as well as across the religious spectrum. “Itjust goes to show you how events like these, hosted by an organization likeCOR, is really meant for all of the community. All are welcome, and it shows.”

Rabbi Oziel opened the evening, and touched on theimportance of the hard work that goes into preparing and celebrating theholiday of Passover. Rabbi Oziel brought up an interesting question: “Why do wesay a special blessing over the act of checking for Chametz (leavened bread)before Passover?” It is just cleaning really. We don’t say a separate blessingover salting of the meat to remove the blood after it has been slaughtered? Theanswer is because checking for Chametz is not just a means to an end, somethingto get out of the way so that we can get on to the fun of the holiday, but infact a mitzvah in itself. For that reason we make a separate blessing over theact of performing this mitzvah.

Following Rabbi Oziel’s remarks, Rabbi Rosen took the stage togo through 100 of the most common Passover questions in 1 hour. Rabbi Rosenshould know as he is COR’s Passover specialist and mans the COR Passoverhotline. In fact, last year alone he answered over 3,000 questions.

Questions addressed everything from everyday items likesugar, salt and milk to more the more complex areas of medications and kitniyot.One of the more popular topics that Rabbi Rosen touched on was items that do notrequire special certification for Passover. Items like raw baby carrots,pre-sliced fresh mushrooms and this year, Folgers regular and decaffeinatedunflavoured instant coffee. “This is really going to save me a lot of money andstress this year at Passover!” commented Mrs. Ruth Gottfried, an attendee ofthe event. “Knowing I can buy some ‘regular’ products rather than having to getones that are specifically marked ‘kosher for Passover’ means that I’m notgoing to be over-spending on regular everyday items that my family uses”.

The true star of the night however may have been the food. Cateredby Ely’s Fine Foods, there was a beautiful and delicious array of appetizersand desserts, including quinoa salad with spinach, cranberries and edamame,steamed vegetable & salmon dumplings with a tangy chili plum sauce andeggplant ratatouille on a sundried tomato phylo cup.

Overall it was an entertaining and informative evening whichnourished both body and soul in preparation of a special holiday – Passover –that is all about mitzvahs that address the body and soul.