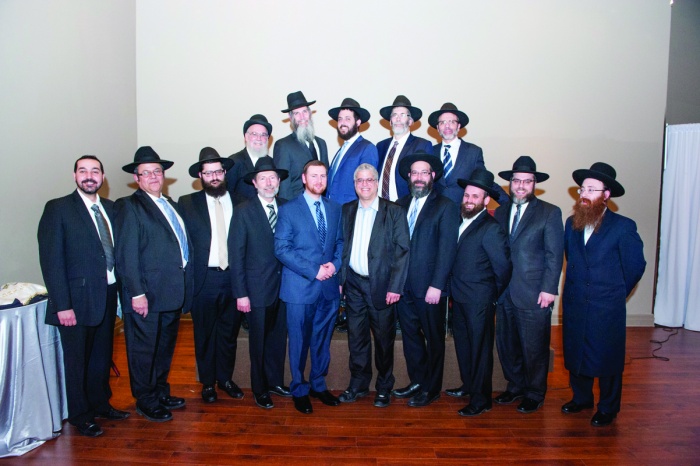 A lawyer attends law school; a doctor goes to medical school; plumbers, electricians and tradespeople of all types have professional training and licensing programs. But the standard in the kosher industry is that someone can become a mashgiach, a kosher supervisor, without such professional training. But thanks to the Kashruth Council of Canada (COR), that is about to change. In conjunction with Liaison Culinary College, the largest private culinary college in Canada, COR has launched a first of its kind college accredited mashgiach training program; and recently, COR commemorated the graduation of its first cohort of 13 mashgichim at a celebratory graduation dinner in Toronto.

The course itself is a rigorous combination of in class lectures, out of class text book readings, labs, video presentations and regular tests culminating in a comprehensive and demanding final examination. The technical kashrut component is taught by senior COR Rabbis and consists of topics including: ensuring compliance with bishul yisrael (Jewish involvement in cooking), kosherizing equipment, checking fruits and vegetables for insect infestation, separating terumot and ma’asrot (tithing fruits and vegetables that come from Israel), hafrashat challah (separating dough), and the laws of Passover, amongst many others. There is also an emphasis on broader skills that a mashgiach requires, such as a conflict resolution course taught by noted author and psychologist Dr. David Lieberman, and a series on auditing techniques — such as inventory control and invoice tracking — tools that are necessary to effectively manage an establishment’s kosher program. Finally, the Liaison College staff taught knife handling, menu skills, and food safety and handling, with each mashgiach graduate also receiving food safety and knife handling certificates.

COR’s Mashgiach Training Program was the brainchild of Rabbi Tsvi Heber, COR’s Director of Community Kosher. Its formulation was years in the making and came to fruition as a result of the involvement of many individuals in the COR organization including Rabbi Moshe Rose, the course curriculum developer, and Rabbi Matis Stebbin, course administrator.

The graduation dinner was catered by Mitzuyan Kosher Catering at The Boulevard Banquet Hall at the Avenue Banquet Hall and was attended by the mashgiach graduates, their spouses, COR staff, community Rabbis, long time COR proprietors and representatives from partner Jewish organizations across the community. Of special note, in attendance was The Honourable Reza Moridi, the Ontario Minister of Training, Colleges and Universities & Ministry of Research and Innovation. The Minister addressed the graduating class, saying, “We know that a child in the womb is affected by the food that his or her mother eats. So too, as Rabbi Felder said, what we eat as adults has an effect on our souls.” The Minister continued, “The skills that you have gained will benefit you greatly and improve food safety and handling in kosher restaurants. Your dedication to helping your community will be valued.”

Rabbi Heber also addressed his graduating class with warm words of congratulations. “I really mean it when I say I can’t believe I’m standing here today. Think about the long nights that you spent away from your families, the assigned reading, the studying, the exams! But now you are all graduates. Just like any other job has a professional training course, now so do you. You are all professional mashgichim! Mazal tov!”

Other representatives of the Jewish community also shared Rabbi Heber’s enthusiasm. “The graduation dinner itself was an elegant event, but more importantly, the milestone celebrated that evening was truly momentous” noted Shimon Koffler Fogel, Chief Executive Officer of the Centre for Israel and Jewish Affairs (CIJA). “Kosher food is something that unites people across the entire Jewish community and having mashgichim who are formally trained at this level raises the calibre of the mashgichim as professionals and increases the collective confidence we have in the products and institutions that they supervise. COR deserves a great deal of credit for trailblazing this very valuable initiative, which weds our sacred tradition with modern-day knowledge and food industry best practices.”

The mashgichim themselves were also struck by the precedent setting nature of the COR Mashgiach Training Program. “This course is a foundational change in the kashrus industry because of all the professional knowledge this course offers,” reflected Rabbi Mendel Gansburg, one of the graduates of the COR Mashgiach Training Program. “I may have known some of this information before, but now that I have been formally educated, I have internalized everything in a more lasting way.” Of particular value to Rabbi Gansburg were the lessons that weren’t limited to technical kashrut. “I really enjoyed the general kitchen skills that we learned. Kitchen knowledge is beneficial for both mashgichim and proprietors because when a mashgiach doesn’t know about the kitchen, the proprietor doesn’t feel he or she is getting the complete benefit of hiring a mashgiach.”

Interestingly, the proprietors – the COR certified establishments that use the services of the mashgichim – appeared to be the most enthusiastic about the program. “Recently, my dream came true,” said Mrs. Aliette Ponte, owner of COR certified LeChaim Catering. “I have been with COR since the beginning and they have been amazing. But my dream has always been to send the mashgichim to school and now finally my dream came true.”

With the graduation dinner now complete, a new crop of mashgichim have already begun their studies at Liaison Culinary College. They are well on their way to obtaining the educational training necessary to obtain the designation that they so very much deserve: professionals.