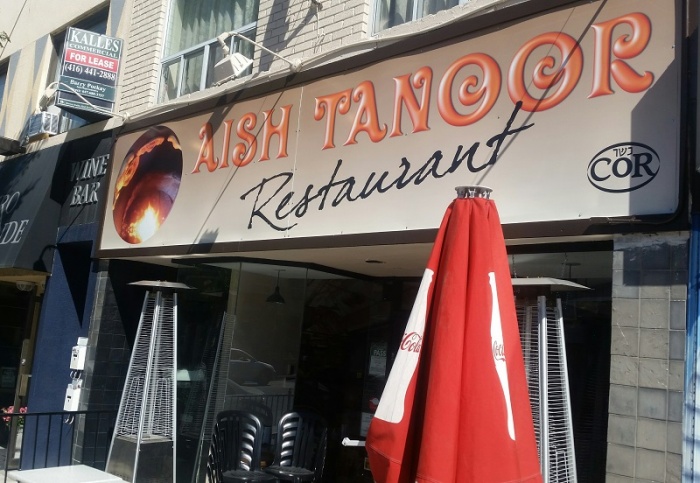 Visiting Israel is certainly not as difficult as it once was, but the 10 hour flight can still be challenging, not to mention costly. So if you can’t make the trip, a visit to the newly opened COR certified restaurant AISH TANOOR is a good consolation. Because if you close your eyes, take a bite and savour the food and the atmosphere, you may just think you’ve been transported to the Holy Land itself.

AISH TANOOR is the new venture of Sasi Haba, a restaurateur well known to Toronto kosher consumers from his previous eatery. AISH TANOOR features authentic Middle Eastern fare, including shawarma, schnitzel, shakshuka, sambuksasi, and of course laffa. But this time the laffas come in regular and whole wheat, with sesame seasoning, nigella or zatar – straight from Israel.

The zatar isn’t the only thing that is straight from Israel – the entire restaurant is, including Sasi, the restaurant owner himself. And the food business is in his blood. Sasi’s grandfather ran a bakery in Baghdad, Iraq. In 1951, his grandfather made Aliyah to Israel and soon thereafter, together with his father opened Haba Bakery in Jerusalem’s famed Mahane Yehuda market. As a young man, Sasi worked in the family bakery, and then with a distant relative who opened a restaurant, also in Mahane Yehuda called Sima which is still open to this day. Sasi worked at Sima for 13 years, and in a story reminiscent of our forefather Jacob, Sasi ended up marrying the daughter of his employer. And just like Jacob, after years of working for his father in law, Sasi knew that it was time to leave, and in 2009 he came to Toronto to open up a restaurant of his own.

But Sasi had never been the ba’al habayit in a restaurant – the head chef, so he called in reinforcements, the person who he calls his “Guru” – his father. “He stayed with me for 4 months and we worked on the special oven, the taboon and he taught me everything. But at the end, he told me, it’s time for you to do it on your own – it’s time to swim. He came back a year later and told me, ‘Now, you’re the best.’ I had tears in my eyes.”

AISH TANOOR is a family affair. Sasi works together with his wife Irit, and his son Sahar who came to Toronto after completing his mandatory military service in the IDF as a paratrooper. But family extends beyond blood to include the wait staff, COR mashgichim and of course the customers. “This is like a family,” says kitchen manager Chaya Feinstat. “We all share a love of good Israeli food and a love of pleasing our customers so AISH TANOOR is just…who we are.”

AISH TANOOR is located on Eglinton Street just off of Bathurst and has been welcomed by the neighbourhood. “Since we opened, people have just been coming in, welcoming us, and telling us how happy they are that we are here,” says Eva Feinstat a waitress at AISH TANOOR and Chaya’s sister.

With a new neighbourhood comes a few new items on the menu. “First cut of the lamb is available,” says Sasi. “If someone wants rack of lamb, it’s available. We’ve got rib eye steak. I make the shakshuka in the bread, which is different than I’ve done before. I even have chicken salad, because in this neighbourhood some people like to go on diets. You know what they say, when it Rome, do as the Romans do.”

There is another saying, a midrash actually – an ancient parable from the sages of the Talmud that says that in the days of the mashiach, synagogues outside of Israel will be transported to Israel. Today in AISH TANOOR, an Israeli restaurant has been transported to Toronto. B’teavon!