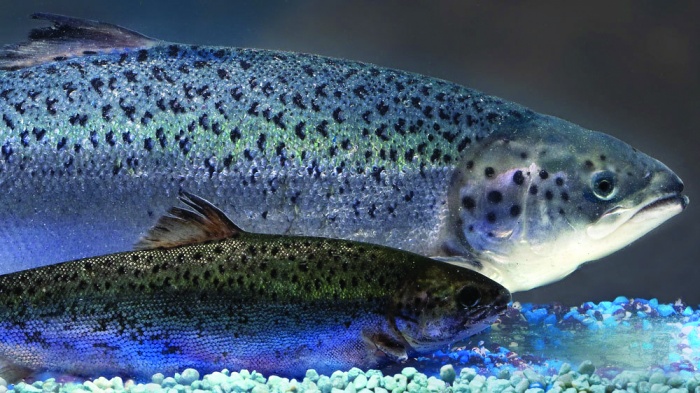 After two decades of exhaustive and rigorous review, the United States Food and Drug Administration (FDA) has recently approved the first ever genetically engineered food animal; a fast growing Atlantic salmon called AquAdvantage Salmon. Likewise in May of 2016, the Canadian Food Inspection Agency (CFIA) also approved the sale of the AquAdvantage Salmon. These Atlantic salmon are genetically modified to carry a growth-hormone regulated gene from a Pacific Chinook salmon, which is further engineered to be under the control of an antifreeze protein gene, called a promoter, from the eel-like ocean pout fish. The genetic modification allows the salmon to grow year-round by increasing natural production of the growth hormone and reducing sensitivity to the cold, all without affecting its ultimate size or other qualities. The fish is said to grow to market size in sixteen to eighteen months rather than the three years that it normally takes Atlantic salmon to mature. The FDA has concluded that food made from AquAdvantage Salmon is as safe as food from other Atlantic salmon.[2] The law does not require food containing ingredients derived from AquAdvantage Salmon to be labeled as genetically modified.[3]

While both Atlantic salmon and Pacific Chinook salmon are inherently kosher, the eel-like ocean pout fish is obviously not. The purpose of this article is to address the kashrus status of the AquAdvantage Salmon in light of the influence of the eel gene. We do not attempt to resolve matters that relate to the permissibility of the process of genetically modifying fish or other animals and food; neither from the halachic perspective nor from the hashkafic perspective. We also do not attempt to weigh in on whether or not genetically modified food in general, and genetically modified salmon in particular, is healthy and safe. Rather, we focus our efforts on determining whether the kashrus status of the finished product is compromised through the process of genetic modification.

The Torah permits consumption of a fish provided that it bears the simanai dagim; both fins and scales.[4] Chazal teach us that any fish that bears scales also bears fins and, therefore, one may consume a headless fish that bears scales since it is known that the fish also possessed fins.[5] While there are four types of scales found on fish; clenoid, cycloid, ganoid and placoid; only clenoid and cycloid scales are signs of a kosher fish. This is because simainai dagim are defined only as scales that can be lifted from the fish without damaging its skin.[6] Ganoid scales, which are found on the sturgeon, are bony plates that cannot be removed without damaging the skin. Similarly, placoid scales, which are found on sharks, appear like thorny teeth and also cannot be removed without damaging the skin. Therefore, neither ganoid nor placoid scales qualify as simanai dagim. Atlantic and Pacific Chinook salmons bear simanai dagim and are kosher fish. Interestingly enough, the freshwater eel also contains fins and small scales but their scales are located beneath their skin and cannot be lifted without tearing through their skin.[7] The ocean pout, a species of the freshwater eel, is not a kosher fish.[8]

The advent of genetically modified fish raises a thought-provoking question. What would be the status of non-kosher fish that is modified to grow scales and what would be the status of a kosher fish that is modified to rid itself of its scales? Before we answer the question, we must first clarify whether the Torah’s requirement of kosher scales should be understood as the distinguishing attribute that allows us to identify a kosher species of fish (in Yeshiva jargon a “siman”); or whether the scales themselves bestow upon the fish its kosher status (a “siba”).[9] If scales are a siman then their absence in genetically modified fish should not alter its kashrus status since we know that this species is kosher and is only lacking identification due to genetic modification. If, on the other hand, scales are a siba, then their absence should change the kashrus status of the fish to non-kosher. In the inverse, if scales are a siman then modifying the non-kosher fish to grow scales should not impact its kashrus status. But if scales are a siba, then modification of the non-kosher fish to grow scales should change its status; rendering it a kosher fish.[10]

Does the Talmud address the question of genetically modified animals? Perhaps. The Mishna in Bechoros[11] discusses the kashrus status of a donkey that is born to a cow and a cow that is born to a donkey! The principle that is presented is clear; if the mother is kosher then the offspring is kosher and if the mother is not kosher then the offspring is also not kosher. This is true regardless of whether or not the offspring displays simanai b’hayma (chews its cud and has split hooves).[12] This halacha seems to indicate that the simanai b’hayma act as a siman and not a siba and, as a siman, their existence or absence does not impact the kashrus status of the offspring.

Does the same principle apply to fish? Would an eel that hatches from a salmon egg be kosher and would a salmon that hatches from the egg of an eel be non-kosher? The Mishna does not openly equate fish to animals. What would be the reason to differentiate?

Rav Elchonon Wasserman[13] points out two different Tosfos that seem to hold opposing views. The Gemara Chullin[14] describes a type of rooster of which the male version, tarnegola d’agma, is not kosher while the female version, tarnegolta d’agma, is kosher.[15] Tosfos Chullin[16] proclaim that it would be impossible for the tarnegola d’agma to be born from the egg of the tarnegolta d’agma since the offspring of a kosher bird are also kosher; regardless of whether or not they display simanai oaf tahor.[17] Had the male tarnegola been born from the female tarnegolta, the male tarnegola would also be kosher. Rather, concludes Tosfos, the tarnegola and the tarnegolta are certainly from two different species; each containing both a male and a female version of similar kashrus status. Tosfos Nida[18] do not agree with this position. They explain that the principle of the Mishna applies only to mammals whose offspring are born to the mother and not to birds whose offspring hatch from an egg. Kosher birds hatch from eggs that are laid by the mother.[19] The child that hatched from the egg is perceived as born from dust; as opposed to born from a mother. The mother’s influence is no longer relevant and we must now determine the kashrus status based on the presence of simanai oaf tahor alone. Accordingly, the tarnegola d’agma is not kosher as it is not considered born from a kosher mother and does not bear simanai oaf tahor. Similarly, the tarnegolta d’agma is kosher regardless of the fact that its father is not kosher since it is not considered born from its parents and it does bear simanai oaf tahor.[20]

At first glance, halacha seems to support the opinion of Tosfos Nida. Shulchan Aruch[22] rules according to the Gemara Temura[23] which states that a chick that hatches from the egg of a chicken that is a nevayla or trayfa is, nevertheless, kosher. The explanation is that the chick hatches only after there is complete decay inside the egg. The decayed egg is like dust and produces a chick that has no connection to its mother.[24] This ruling seems congruent with Tosfos Nida who use this line of reasoning to explain why the tarnegola d’agma is not kosher and why the tarnegolta d’agma is kosher.

Rabbeinu Chaim HaLevi[25] does not accept this approach and supports his argument by proving that it is the position of the Rambam.[26] Through a remarkably brilliant insight in the Rambam, Rabbeinu Chaim HaLevi differentiates between the offspring of the nevayla and trayfa which belong to the family of the kosher species and the offspring of the non-kosher species which belong to the family of the non-kosher species. Even though we can accept that the lineage of an animal that hatches from an egg is severed from the lineage of its parents, we do not accept that it is severed from its identity as the species it was born to. This position seems to be at odds with Tosfos Nida that hold that the tarnegolta d’agma is kosher notwithstanding that one of its parents is not.[27]

Applying the above principles to AquAdvantage salmon that bears simanai dagim, if we were to accept the position of Tosfos Nida and assume that simanai dagim are a siba then our salmon is clearly permitted as it is not worse than the tarnegolta d’agma.[28] If, on the other hand, we were to accept the position of Rabbeinu Chaim Halevi in the Rambam and Tosfos Chullin that scales are a siman, then their presence in the AquAdvantage salmon is not the determining factor. Rather, we must further analyze whether or not genetic modification adulterates the salmon to the extent that the offspring must now identify as part of the eel family due to the presence of the eel gene.

The Gemara Kesubos[29] rules according to the opinion that a mule, a “manmade species” that resulted from the crossbreeding a horse and a donkey[30], may not be further crossbred neither with a horse nor with a donkey but only with another mule. This ruling is based on the opinion in the Gemara Chullin[31] that we are not sure if the mule should identify with its father’s species. Therefore, we cannot allow the mule to crossbreed with either the horse or the donkey. Does this mean that we must similarly identify our genetically modified salmon as an eel?

Tosfos Chullin[32] unequivocally state that we do not consider the identity of the father in the question of kashrus. Rather, it affects other areas of halacha such as the prohibitions of crossbreeding species, slaughtering the parent and child on the same day and the consumption of forbidden fats; as well as the obligation to cover its blood. When it comes to kashrus, we are instructed to consider all fundamental influences on the product equally. An example of the application of this principle in kashrus is the production of rennet-set cheese that uses both kosher and non-kosher rennet to coagulate. Assuming that the non-kosher rennet does not have the power on its own to coagulate the milk[33] and assuming that there is sixty times milk to non-kosher rennet such that the taste of the rennet is undetectable, the resulting cheese is kosher.[34] Similarly, while the eel gene bears influence on the resulting salmon, it is neither the only nor the primary influence on resulting salmon. Accordingly, the AquAdvantage salmon is kosher.

Rav Shlomo Zalman Aeurbach[35] further differentiates between crossbreeding of the mule and the process of genetic modification and posits that genetic modification of an animal[36] does not constitute the prohibition of crossbreeding. It would appear that he would similarly be of the opinion that the influence of the eel gene does not bear influence on the offspring.

In conclusion, it would appear that AquAdvantage salmon is kosher.[37]

The Ohr Hachaim HaKadosh[38] quotes the Medrash that explains that the reason why the pig is called a chazir is because it will, one day in the near future, “transform” (chozer) into a kosher animal. May we be witnesses to the miraculous “genetic modification” of the chazir speedily; in our days.