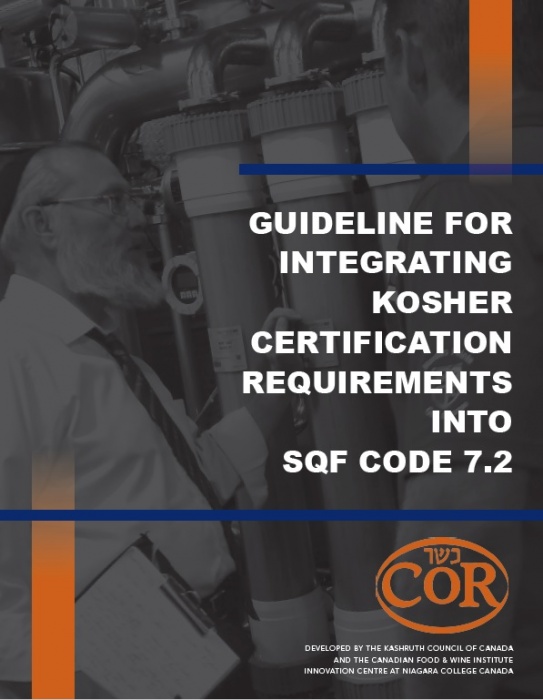 Seeking a more efficient way to make kosher certification integrate with food safety planning, the Kashruth Council of Canada recently partnered with Niagara College on an ambitious project to do just that.

Most of the world’s leading food retailers and manufactures participate in the Global Food Safety Initiative (GFSI), which sets standards for food safety, with the British Retail Consortium (BRC) and the Safe Quality Food Program (SQF) as the most predominant GFSI regimes. At the same time, many food manufacturers carry kosher certification as more than 40% of packaged food products sold in the United States are kosher certified, according to market research firm Mintel.

While there is much overlap between kosher and food safety programs, they have been kept markedly separate. Until now.

The Kashruth Council of Canada, better known as “COR” by their kosher symbol, and Niagara College Canada’s Canadian Food & Wine Institute (CFWI) Innovation Centre collaborated on a project to integrate kosher certification requirements into both SQF and BRC food safety programs. This work is now being released to the food manufacturing community.

“We are thrilled to offer this service to the food manufacturing community,” says Rabbi Sholom H. Adler, COR’s Director of Industrial Kosher. “We are always looking for ways to make kosher certification more efficient and effective for our kosher certified companies, and we are hopeful that this project will do just that.”

“Food manufacturers already speak a certain language, and that is the language of SQF and BRC,” says Dr. Amy Proulx, Niagara College professor, program coordinator with the Culinary Innovation and Food Technology program, and faculty lead on the project. “What this project has done is translate kosher certification into that same language spoken by food safety professionals. As a result, I am confident that this initiative will be well received.”

The newly released kosher guidelines are not meant to supplant an existing kosher certification program, but rather to supplement one. “Whatever kosher certification partner a manufacturer has, this new framework will simply help organize one’s kosher program,” says Richard Rabkin, COR’s Managing Director. “In short, our hope is that it will make keeping kosher easier.”

Indeed, this new initiative has support from across the kosher industry, as it has been endorsed by other leading kosher agencies including the Orthodox Union (OU), Stark-K Kosher Certification (Star-K), Kof-K Kosher Supervision (Kof-K), Chicago Rabbinical Council (cRc) and the Rabbinical Council of New England (KVH).

Electronic copies of the newly published guidelines are available at no charge at the links below:

Print copies may be purchased by contacting the Kashruth Council of Canada directly at (416) 635-9550 or [email protected].