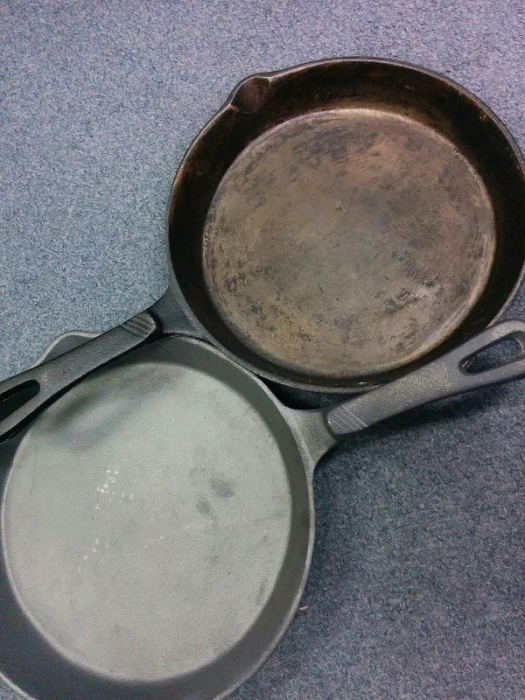 Ever since my wife introduced me to cast iron cookware, I have been enamoured. They impart a fabulous sear, work on all stove top surfaces, can go from stove top to oven, and they keep food warm longer because of their superior heat retention.

Researching the history of cast iron cookery, I discovered some interesting facts.

The History of Cast Iron

Historians believe cast iron was invented in China in the 5th century BCE. The first widespread use of cast iron cookware was in the 16th century. With the innovation of sand casting in 1707, cast iron became both lighter and cheaper. This very method is still used today. The cast iron skillet was born towards the end of the 19th century when it became popular to use flat cooking surfaces.

Before the advent of aluminium non-stick and even stainless steel pans, cast iron was the benchmark for cookware. During the late 1800’s to the early 1900’s, production and innovation flourished, forming the golden age of cast iron. Skillets from that era are highly prized and most sought after. They are known to be family heirlooms and passed down from generation to generation. For some, finding an old and unique cast iron pan in an antique shop or even a local garage sale can be very exciting!

Cast iron differs from all other cookware in that if left untreated it will rust. Therefore in order to be an effective cooking surface it requires seasoning. Seasoning is a protective layer formed by burning fat or oil on to the surface of the pan. Traditionally bacon was fried and its rendered fat was used for the seasoning.

This obviously presents a problem from a kosher perspective. The questions now are: Can this item be kashered? Would the seasoning need to be removed before kashering? What kind of kashering would it need?

I posed these questions to my colleague at the COR, Rabbi Yechiel Teichman, who determined that two steps must be taken. First, it would require kashering at an extremely high heat using libun gamur (see our Kashering Overview in this Guide). For cookware that you usually use with liquid like pots, pans, or skillets a self-clean oven cycle is sufficient. For grill-tops, griddles, or griddle pans covering them with coals and allowing them to burn-out is required to achieve libun gamur. Second, it would require immersion in mikva.

In addition to the kashering requirements a full stripping and re-seasoning of the cast iron vessel would be necessary.

So my plan had three parts: self-clean the pan in the oven, tovel it in the mikva, and then re-season it to create the perfect working surface.

Many old cast iron skillets contain burnt on grease (this is not usually the case with newer skillets). All cast iron cookware also have seasoning. Seasoning is the process of coating the bare metal with multiple layers of polymerised oil to create a barrier against rust and will provide a non-stick surface. Without seasoning the pan will become rusty and unusable.

The high heat required to accomplish libun gamur also burns all surface grime and old seasoning to a powdery ash. This will clean and strip the pan while also kashering it.

Since the cleaning and stripping process leaves the metal bare, you must be careful to avoid rust. Completely dry the pan after immersion in the mikva.

Now that you have a clean and kosher pan, you must return it to its seasoned state. This will create the perfect cooking surface. If you have a newer pan with a pebbled surface, before re-seasoning the pan, you can grind the surface for a mirror smooth surface finish.

The seasoning layer is accomplished by smearing oil and baking it so that the oil polymer rises and forms a solid layer. The oil should be applied as thinly as possible and heated past the smoking point. It is then cooled and redone multiple times until a strong cooking surface is formed.

Note: This article applies to used cast iron only. As per COR policy, new cast iron does not require kashering. Like all other metal pans it would require immersion in the mikva.