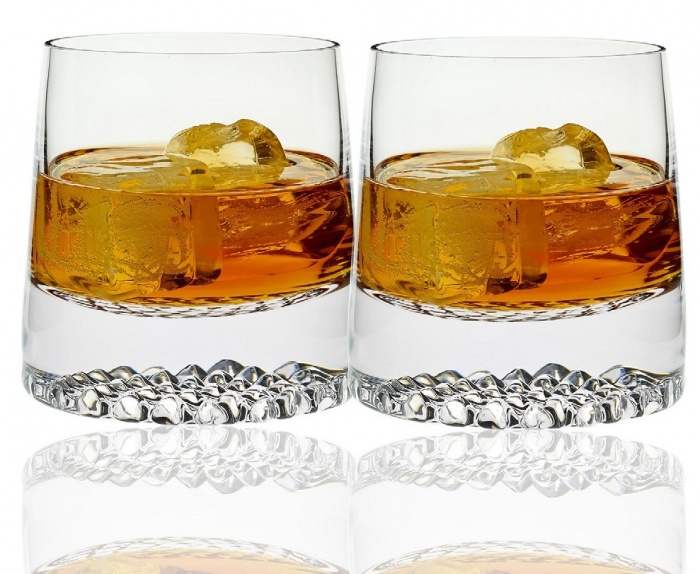 The Secret is out of the Barrel1
Months of extensive and exhaustive research into the kashrus of uncertified Canadian whisky has revealed its true colours. Red and white are not only the colours that we paint on the Canadian national flag, they are also the colours of wine; wine which has apparently long been a significant ingredient in the production of many popular brands of Canadian whisky. The whisky industry is, by definition, full of secrets; and Canadian whisky manufactures are no exception. It was, therefore, quite difficult for the rabbis at COR to wade through the rumors and theories regarding additives in order to obtain reliable and precise information. Notwithstanding the challenges, we were able to gather credible information through our relationships with local distilleries and by virtue of the respect that the COR has earned in the Canadian food and beverage industry over the decades. The purpose of this article is to present our findings along with an accompanying halachic discourse in order to determine the kashrus status of Canadian whisky.

Non-Kosher Tax
The issue that we set out to clarify was whether Canadian whisky is generally a pure grain alcohol or is it more likely to have a mixture of ingredients, including non-kosher wine that might affect its kashrus status. Canadian law is rather loose regarding the definition of Canadian whisky.2 The code allows for added flavouring, which may include the introduction of wine. We discovered that many manufacturers indeed take advantage of this allowance for two reasons; firstly, to improve the taste of the whisky by smoothing out the naturally rough whisky flavour; and, secondly, for tax-saving purposes. A large percentage of Canadian whisky is exported to the United States in tankers and bottled there. Since the U.S. excise tax rate for wine alcohol is much lower than it is for spirit alcohol, companies can save money by adding wine into the mixture. Fascinatingly enough, tax law seems to be the underlying cause for a legitimate kashrus concern regarding Canadian whisky.

Wine in Whisky: Six or Sixty?
Before we expound upon the finer points of our research, it is pertinent to set out the basic halachic principles that govern the presence of non-kosher wine in whisky. While the nullification (bitul) of a prohibited substance (issur) that was inadvertently mixed into a permitted substance (heter) generally requires that the volume of heter is at least sixty times greater than the volume of issur (batul b’shishim), wine is an exception to this rule.3 Halacha stipulates that wine (issur) is batul in water (heter) when the dilution proportion is merely six times greater (batul b’shisha).4 Additionally, there is a well-known dispute amongst the Poskim as to whether other kosher beverages, excluding kosher wine, have the same effect as water. Taz5 opines that non-kosher wine is batul b’shisha in other such beverages, such as whisky, so as long as its volume does not exceed 1/6th of the volume of the beverage. Shach6 disagrees and maintains that only water effects wine at the smaller proportion. Other kosher beverages, including whisky, require the standard proportion of sixty times; bitul b’shishim. Rav Moshe Feinstein7 rules in accordance with the Taz and states that wine is indeed batul b’shisha in whisky. Notwithstanding, Rav Moshe advises scrupulous individuals to be stringent on the matter and not to rely on this leniency.

Kashrus Audit or Tax Audit?
We set out to determine the maximum volume of wine that might be added into Canadian whisky without compromising the aroma, taste and character generally attributed to Canadian whisky. Canadian whisky that is sold to the U.S. can only be labelled as Canadian whisky if it contains not more than 9.09%, 1:11, wine added to whisky for flavour.8 Since there is a tax benefit, Canadian distillers tend to take full advantage of the 9.09% limit. Although this appears to fall well within the batul b’shisha limit, it is actually not so simple. That is because the 9.09% wine limit is measured by the volume of wine alcohol “Alcohol by Volume” (ABV) present in the mixture rather than by the volume of wine present in the mixture. Since wine has a lower alcohol content than whisky, it will take more wine than 9.09% to effect an ABV content of 9.09%. The following example describes this calculation:

In the example, the completed beverage actually contains 17% wine, but since the wine has a relatively low percentage of alcohol (21%) it is calculated as if it only comprises 9.09%. Thus, from the perspective of halacha, the beverage contains more than 1/6th wine and the wine is not batul b’shisha.

Kashrus Loophole
Although the wine content allowed in Canadian whisky appears to be problematic, in fact, this is not the case. The wine that is used in whisky is “fortified wine” which contains 21% alcohol. Fortified wine is a wine to which a distilled spirit is added. Since regular grape wine is never more than 14-15% ABV, fortified wine uses spirits to increase the ABV. As an example, in order to yield 10,000 litres of fortified wine containing 21% ABV, 9200 litres of 14.5% wine would be mixed together with 800 litres of 96% spirits. The dilution effect in our example further complicates our ability to determine the true proportion of wine to whisky. Another consideration is that often the wine used is not even grape wine.

More Detective Work
As we grappled with these calculations and prodded our contacts further to help us determine whether Canadian whisky was indeed halachically problematic, we were able to uncover yet another inside industry secret. When fortifying wine for the purpose of realizing maximum tax benefit, companies try to use the least amount of wine possible to maximize savings by diluting the wine in water prior to adding it to whisky. The new, diluted wine is more cost effective since the law allows the distillery to claim this portion of the whisky under the wine tax rate. In order to qualify as wine, the mixture must only contain 0.5% alcohol. The manufacturers, therefore, add water to the fortified wine, thereby, bringing down the alcohol content to 0.5%. Then they add more spirits to restore the 21% alcohol content as can be seen in the following example:

In Chart 1, the fortified wine component was 4,328 litres out of the total 25,000 litres. Chart 2 shows the actual breakdown of this fortified wine.

Using the above method of fortification, the actual wine content of Canadian whisky is below 1% and therefore not only is it batul b’shisha, it is even batul b’shishim. Furthermore, there is absolutely no dispute to the fact that water affects the wine as long as its volume is six times greater. Non-kosher wine will therefore not have any detrimental effect on the kashrus of Canadian whisky.

Forty Percent ABV
Another relevant point to consider is that approximately 50% water is added to Canadian whisky after it is aged and prior to bottling in order to bring the ABV down to 40%, which is required by law. This means that irrespective of whether or not the wine was already batul in water during the fortification process, it will become batul b’shisha in water which is added to the whisky later on. Remember that there is no dispute as to whether wine in water is batul b’shisha.

So, can we drink it?
COR staff presented the above findings to its Poskim who paskened that COR may continue to allow uncertified Canadian whisky at catered events under its certification.9

Dissenting Opinion
Not every kashrus organization continued to allow Canadian whisky subsequent to COR’s research into the matter. Others felt that they should not continue to recommend Canadian whisky unless it is known to be completely clear of non-kosher wine.10 This position is primarily justified due to the well-known position of the Rashba who holds that bitul, in general, can only govern mixtures in which the issur had inadvertently became mixed into the heter. In cases, such as ours, where the issur is used deliberately as an ingredient in the mixture, it can never be batul at any proportion.11 Many Poskim rule in accordance with the Rashba’s opinion when it comes to non-kosher wine12, as well as to chometz on Pesach.13

Accordingly, there are grounds to consider the intentional mixing of wine as an ingredient in Canadian whisky, at any proportion, to be halachically problematic.

Concluding Argument
Many disagree with the Rashba’s chumra, in general.14 Ashkenazic custom generally follows the position of the Rama who specifically takes issue with the Rashba’s opinion as it pertains to non-kosher wine.15 Furthermore, some argue that it is inappropriate to apply this chumra other than to a prohibition that is both forbidden for consumption (issur achila) as well as forbidden from deriving any benefit (issur hana’ah). Logic dictates that it is the fact that the minor ingredient is assur b’hana’ah that does not allow it to become batul at any proportion, according to the Rashba. Accordingly, it can be argued that the Rashba’s chumra does not apply to contemporary non-kosher wine since, according to many Poskim, it is not assur b’hana’ah.16 As with all matters of halacha, one should consult with their Rav for a final psak.

CORporate Policy
It should be noted that COR certification policy does not allow for the certification of any product or beverage containing even a minute amount of issur which is batul. COR would, therefore, not consider placing its symbol on a product which contains non-kosher wine or any other non-kosher ingredient at any proportion, although it is permitted to consume the product. In the near future, one of the major brands of Canadian whisky will bear the COR label signifying that the particular brand contains either no added wine or, if wine is added, it is actually kosher certified wine.

1 The authors wish to thank Rabbi Sholom H. Adler shlit”a, Kashrus Administrator COR, for the role he played in leading the research and subsequent dissemination of this subject. Rabbi Adler is a leading expert in the field of the kashrus. Rabbi Adler’s expertise and connections in the industry has made the research of the kashrus of Canadian whisky along with this subsequent presentation possible.
2 Section B.02.020 [S] of the Food and Drug Regulation states: Canadian whisky, Canadian Rye whisky
or Rye whisky shall (a) be (i) a potable alcoholic distillate, or a mixture of potable alcoholic distillates, obtained from a mash of cereal grain or cereal grain products saccharified by diastase of malt or by other enzymes and fermented by the action of yeast or a mixture of yeast and other micro-organisms, (ii) be aged on a small wood for not less than three years, (iii) possess the aroma, taste and character generally attributed to Canadian whisky, (iv) be manufactured in accordance with the requirements of the Excise Act and the regulations made thereunder, (v) be mashed, distilled and aged in Canada (vi) contain not less than 40 per cent alcohol by volume; and (b) may contain caramel and flavouring.
3 Shulchan Aruch, Yoreh Deah (YD) [98:1]
4 ibid. [134:5]
5 ibid. [114:4]
6 ibid. Haga’os Nekudas HaKesef
7 Shu”t Igros Moshe YD [1:62-64]
8 See, for example, http://www.lawgill.com/legal-and-practical-elements-of-the-9-09-canadian-whisky- blending-rule/
9 This follows the view HaRav Shlomo Miller shlit”a, Rosh Beis Din, Kollel Toronto
10 See, for example, http://www.crcweb.org/LiquorList.pdf
11 Bais Yosef YD [134:13] in the name of the Rashba
12 Shulchan Aruch YD [134:13]
13 Shulchan Aruch HaRav Orach Chaim (OC) [442:6]
14 Pischei Teshuva YD [134:8] bringing the opinion of the Noda B’Yehuda in the name of many Rishonim
15 ibid. [134:13] Rama cites his own comment in YD [114:4] which specifically states that non-kosher wine can be batul in other kosher beverages even if it placed there intentionally.
16 See Rema YD [123:1]