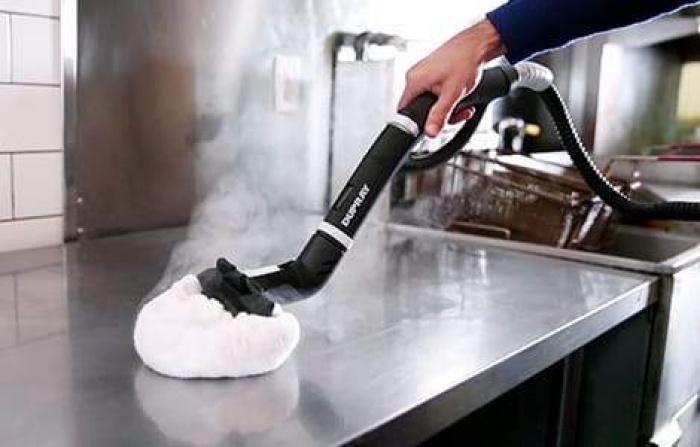 A good steam cleaner picks up dirt and removes bacteria. But, could it be used to kasher your countertops for Pesach?

Besides removing any visible chametz from one’s possession, a person is tasked with the responsibility of ensuring that there is no chametz absorbed into a utensil or surface that will come into contact with food over Pesach. When food is heated in a pot or if liquid is left on a surface for a period of time,1 flavour from the food or liquid (ta’am) becomes absorbed into the pot. This flavour will be released and absorbed into food that is heated in the pot or into liquid left in the pot for a period of time. Similarly, if hot food containing chametz ingredients touches a counter, the ta’am of chametz will be absorbed into the counter. And if hot food touches the counter over Pesach, that forbidden chametz flavour will be transferred into the food.2

The counter in the kitchen is the surface on which food is prepared, hot pots are placed, and food is plated. In a typical house, the counter experiences its share of spills,3 and, as the year progresses, it absorbs a significant amount of chametz flavour. In order for the countertops to be usable over Pesach without being covered, the ta’am of chametz must be removed through kashering. This of course assumes that the countertop is made from material which can be kashered. (Please refer to page 41 of this publication for lists of countertops which can and cannot be kashered).

After the countertops are cleaned thoroughly and not used for hot chametz for 24 hours, a person can kasher them by pouring boiling hot water from a kettle or pot that was on a flame onto the countertop.4 One must be careful that the boiling water touches every spot of the counter as it is being poured. It is not sufficient to simply pour boiling water on a few spots and allow the water to spread to the rest of the counter’s surface. Since such a kashering is difficult to achieve, an iron can be used to boil a thin layer of water that has been poured onto the countertop.

This operation is time-consuming, a lot of boiling water is required which is quite dangerous, and of course all that water needs to be cleaned up. Is there a more efficient way to kasher one’s countertops for Pesach?

A logical option would be to use steam. Steam is the result of water that has been heated past its boiling point of 100°C (212°F). It is fairly simple to find a machine that produces steam by boiling water designed to clean surfaces without leaving behind a flood. If one was able to use such a machine for kashering, it would result in a clean countertop and a kitchen without a mess.

However, using steam as a way to kasher counters is not straightforward. Steam dissipates and cools quickly as it comes out of the machine and into contact with cold air. Even if the nozzle of the machine is held close to the counter such that the steam would retain its heat when it reaches the counter’s surface, it is not clear that such a kashering is effective. The Shulchan Aruch5 writes that water that comes from the chamei Teveria, hot springs of Tiberius, may not be used to kasher utensils. Even though the chamei Teveria is boiling, since it is not heated up by a fire, it is incapable of purging a utensil of the flavour that has been absorbed into it. This is based on the principle called “k’bolao kach polto”, the manner in which flavour is absorbed is the way that it must be removed. Since the flavour was absorbed into the pot through boiling water on a fire, it can only be removed via boiling water on a fire.

Based on this principle one might argue that steam is similar to chamei Teveria and is ineffective when it comes to removing ta’am. Indeed, Rav Moshe Feinstein zt”l6 discusses the use of steam as a means to kasher in response to a question of how to kasher a glycerin factory. He concludes that steam should not be used for kashering even though it may be even hotter than boiling water. He argues that although water will draw out the forbidden flavour absorbed in utensils, it is possible that steam does not produce the same effect, and the forbidden ta’am would remain absorbed in the utensils. Accordingly, pure steam may not be used to kasher a countertop for Pesach. That said, there are steamers that will spray a combination of steam and boiling water. Such steamers could potentially be used to kasher if held close enough to the surface such that a person can ensure that the water stays hot as it hits the surface.7

Another potential solution is to use pure steam but to spray enough on the countertop such that the steam condenses into water8 while the continuing flow of steam heats up the newly condensed water until it boils.9 However, this solution is not practical with every type of steamer. First of all, many steamers produce “dry steam” or low moisture vapour which leaves almost no damp residue on the surface. As well, even for those steamers that do use steam which condenses, it still takes a significant amount of time to have enough condensation heated to the boiling point across the countertop. It is also important to note that when one sees the water on the counter bubbling under the steam, he has to be sure that the bubbles are coming from the boiling of the water and not from steam that was injected into the water. In fact, almost every non-industrial steamer that we tested produced steam that was not sufficiently hot and would be entirely incapable of boiling water. An engineer who was consulted for the purposes of this article also confirmed that this type of kashering is highly impractical if not impossible.

In conclusion, a machine that sprays steam alone should not be used. Although such a machine may be difficult to find, only a steamer that sprays boiling water along with the steam may be used to kasher countertops. When doing so, it is important to ensure that the boiling water touches every spot. Only in such a manner would one be able to use a steamer to kasher.10