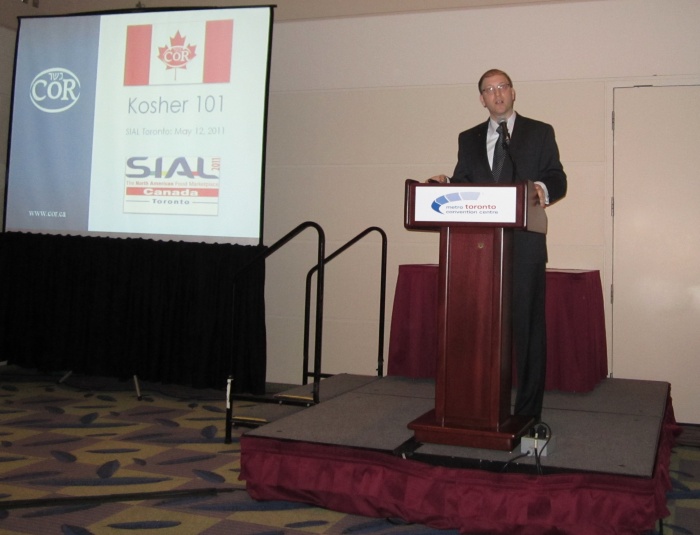 For COR, the Kashruth Council of Canada, kosher isn’t only about food. It’s also about education. And nowhere was this more apparent than at the recent SIAL Canada food show.

SIAL Canada is an international tradeshow dedicated to food industry professionals which targets the North American market. Each year, over 530 agrifood exhibitors and 12,000 professionals come together for this event. This year, SIAL Canada was held from May 11-13 at the Metro Convention Centre in downtown Toronto. And COR was asked to give a featured seminar on kosher.

Working closely with the Government of Canada, specifically, the Food Industry Division at Agriculture & Agri-Food Canada, COR gave one of its popular “Kosher 101” presentations to food executives interested in going kosher. The presentation was given by Richard Rabkin, Director of Marketing and Business Development for COR. Richard explained the ins and outs of kosher, but also why kosher is a much sought after designation in the food market. “Some people are surprised when I tell them that only %15-%20 of actively kosher consumers are Jewish,” said Rabkin. “Other people who rely on kosher certification include vegetarians, vegans, people who are lactose intolerant, other religious groups such as Muslims or Hindus, or those who feel that kosher food is either healthier or safer. So while Jewish kosher consumers may be our ‘early adapters’ the kosher market is extremely broad.”

In fact, one of COR’s valued companies, Italian Home Bakery attended the Kosher 101 seminar to speak to prospective companies on COR’s behalf. John Rosetti, Vice President and Chief Financial Officer at Italian Home Bakery commented, “We value kosher because it opens up an important consumer segment to us that would not buy our product otherwise. Consumers see kosher as an extra set of eyes watching the manufacturing of the product and that gives them an added level of security when they buy our products.”

On working with the COR, Canada’s largest kosher certifier, Rosetti continued, “In this global business environment, call me old fashion, but I still value relationships. I wanted a certifier that is both reliable and accepted, which the COR is, but I also chose COR because it is a certification agency that I enjoy working with, that is customer centric, that is available for us any time we call. To any food company weighing this decision, I would definitely recommend going kosher. And going kosher with COR.”