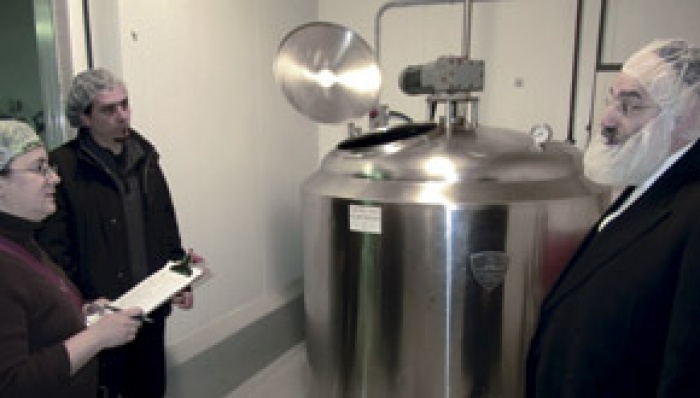 What would we do all summer without a steady supply of kosher ice cream? If you’ve ever made it at home, you probably used milk or cream, sugar, and maybe eggs, and vanilla, mint or nuts.

But modern industrial kosher production isn’t so simple. Additives such as flavourings, colourings and stabilizers can all conspire to ruin a Jewish kid’s summer day.

With the help of the Kashruth Council of Canada, Metropolitan Ice Cream has been churning out gourmet kosher frozen desserts since the early 1980s. At peak production, Metropolitan can produce 400 litres of ice cream per hour. That’s a lot of sweetness, as a peek into their giant freezer room attests. Don’t stay in there too long, though: temperatures hover around -25 Celsius all year round.

Even in a factory, making ice cream is basically the same as at home, but you’ll need large metal tanks that hold hundreds of litres. For dairy ice cream, base ingredients are mixed, then they’re pasteurized to kill any harmful organisms and improve texture. This is the only stage in which heat is used, which makes kosher supervision much simpler. If heat were involved, the process would be more elaborate, with rabbinical required supervision throughout the manufacturing process.

When Tony Zuccaro’s family first took over the business in 1995, he ate ice cream every day. It’s still tough to resist: he prides himself on taking no shortcuts, using local fruit in season, and real milk, not powdered, despite growing industry pressure.

“If you use powdered milk, you add… other ingredients that are not from a cow – you’re saving 30 per cent on your milk cost.”

Not all of Metropolitan’s frozen treats are kosher, but the emphasis on pure ingredients gives Metropolitan an advantage in complying with Kashruth Council guidelines, which haven’t changed much over the years: every ingredient but milk must bear a symbol from a recognized kashrut organization such as the OU or MK, or the council’s own COR.

Fresh fruit is an exception. All fruit is kosher, so large fruits such as bananas, orange and lemons are easy. But insects can sometimes be found in small fruits, such as raspberries and strawberries, which Metropolitan buys locally.

“There’s no way they could use whole raspberries,” said the Kashruth Council’s Rabbi Sholom Adler. Instead, berries are individually quick frozen, then puréed in large batches, which halachically nullifies any insects that may have been present.

But with other ingredients, even if they’re all natural, there are pitfalls, such as flavourings. Rabbi Adler notes that “every flavour has 80 to 100 components,” some of which could come from non-kosher sources, such as civet, derived from glands of male and female civet cats.

Metropolitan uses food colouring in certain flavours, mainly because people expect it. Zuccaro says “some customers insist that banana flavour should be yellow,” or that pistachio be green. Colourings can be water- or oil-based, lending another dimension to the detective work of keeping it all kosher.

Some colourings, such as a red dye used in candy or maraschino cherries, are derived from insects – making them natural, but completely non-kosher. Then there are emulsifiers, which include the eggs you might add to homemade ice cream to improve its texture, but can also include fats and oils from non-kosher animals.

And if you’ve ever seen mono- or diglycerides on a product’s ingredients, these are just part of a large category of additives that keep ice cream smoothly mixed and palatable. They, too, can come from animal sources if there’s no kosher symbol. Similarly, gelatin, seen frequently in low- or no-fat yogurt products, replaces some of the smoothness and lost “mouth-feel” of the fat. It also keeps ice cream stable longer at room temperature.

Ultimately, consumers can’t tell anymore what’s kosher just by reading a label. “Rabbis go through formulas, and formulas of sub-ingredients, to make sure it’s kosher,” Rabbi Adler says. The Kashruth Council maintains a database of thousands of ingredients and suppliers just to keep up with the complex world of food additives.

Flavourings and fruit are added right at the end, while the mix is pumped into a continuous freezer, which is powerful enough to start pumping out frozen ice cream within 30 seconds. For gelato and pareve desserts, there are smaller batch freezers that take about 10-15 minutes.

Adler says that because the process at Metropolitan is all cold – non-kosher ingredients such as gelatin or wine are only added at the freezing stage – cleaning the equipment well between non-kosher and kosher flavours is sufficient. “The wash is a standard procedure for Metropolitan,” he says. “This is an inherent reassurance that they will wash the machine properly for their own purposes.”

Because heat isn’t involved, supervision is less complicated. Mashgichim (supervisors) have access to the factory at any time, but generally only need to come through about eight times a year.

Dairy and non-dairy desserts are produced in entirely separate rooms, ensuring that the word “pareve” on the label means exactly what it says.

Zuccaro says kosher is on its way to being seen as yet another layer of quality and supervision, similar to food-safety and quality programs such as HACCP and ISO. The Kashrut Council’s marketing director Richard Rabkin notes that “only 15 per cent of kosher consumers are Jewish – others are vegetarian, vegan, Muslim.”

Zuccaro’s committment to kosher goes beyond ice cream to his longstanding friendship with the Jewish community through donations and sponsorships, for which thank-you letters line the walls of Metropolitan’s boardroom, as well as ongoing relationships with major caterers, providing specific custom products or flavours, such as Chocolate Chipotle or Honey Pumpkin, on request.

He admits he can’t undercut some competitors on price. “If cream costs $6 a litre, how can you sell two litres of ice cream for $6? Obviously, it’s not cream.” Instead, he says, “we make ice cream the way a chef would make it in the kitchen.”

This article originally appeared in the Canadian Jewish News.