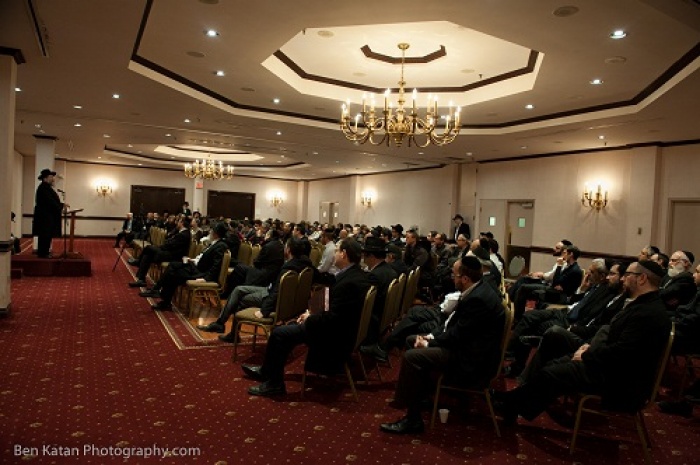 Rabbi Korobkin, senior Rabbi at Beth Avraham Yoseph of Toronto (BAYT) provided opening words, pointing out the importance of keeping kosher year round but particularly on Passover, and praised COR for both ensuring high standards of kashrut in the Canadian Jewish community as well as providing educational opportunities to learn more about the details of keeping kosher.

Rabbi Elefant introduced himself as having worked at the kashrut division of the OU for 25 years and having a warm relationship with the COR for just as long a time. He then spoke about kosher products in general and then focused on some foods that are consumed during Passover. He noted that there are constant changes in kosher food manufacture. Items that in the past were considered kosher with no certification are now in fact not kosher and vice versa.

For example, Rabbi Elefant discussed the tremendous growth in recent years of kosher supervised foods being manufactured in China. Food manufacturers in China operate much differently than those in North America. A huge facility in China may manufacture cookies with kosher ingredients in one area and then use totally non kosher ingredients in the immediate vicinity or even share equipment thereby introducing serious cross contamination and kashrut concerns. Rabbi Elefant emphasized that because most products we purchase today contain ingredients that originated in China in some aspect, consumers must remain vigilant in purchasing food with reliable kosher certification.

Rabbi Elefant stressed that consumers should be careful when purchasing wine. Although it is desirable to support Israeli products and a great many wines are exported from the Holy Land, there are some relevant kosher issues at play. For example, 2008 was a Shmita year so wines produced during that year should ideally not be consumed. In addition, a proper kosher certification will resolve any issues related to laws tied to the Land of Israel including Terumos and Maasersas well as Orlah.

Another area that Rabbi Elefant pointed out with regards to Passover was medicines. He stressed that if you are taking medication for a serious illness there is no reason to ask your rabbi, but rather take the medication. If the medication is of less importance to one’s health, asking your rabbi, looking for a certified products and calling a kosher certifier such as the COR is advisable.

Switching gears, Rabbi Moshe Tuvia Lieff titled his remarks: Nuclear Conflict: The 11th Plague? Rabbi Lieff assured the audience that while we live in difficult times, if we believe in G-d, he will protect us just as He did during the times of the Exodus from Egypt. Rabbi Lieff stated that the Jewish people must have confidence that we will be protected. Fear and worry are never beneficial — they only cause harm. Rather than worry, we need to put our faith in Hashem.

Rabbi Lieff then turned to the Pesach seder and explained that the premier message of the seder is to explain to our children that G-d exists and that He took care of us years ago, he will take care of today.

He continued by telling a story about a gift that he received last year by one of his congregants. This person’s mother was a survivor of Auschwitz and on the day of her liberation, she went into the S.S. dining room and took two small spoons with the S.S. insignia on them. She kept these two spoons for many years and one was given to Rabbi Lieff. At the Pesach seder, Rabbi Lieff now uses this spoon to dish out the marror and charoset! This is a most meaningful symbol of triumph over adversity!

The evening concluded with a brief question and answer period so that attendees could get responses to their Pesach related inquiries.