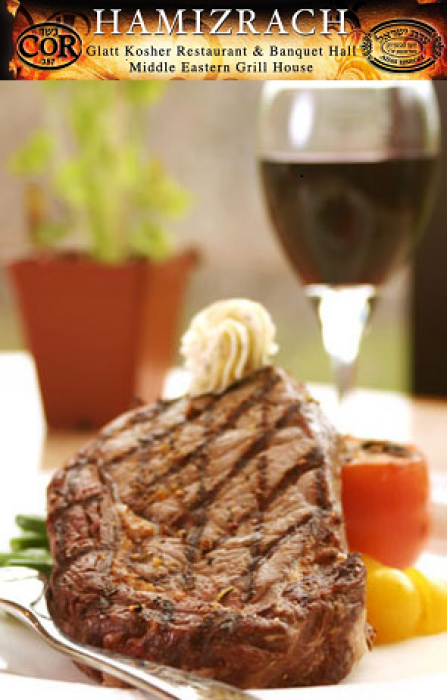 As Jewish people we know that food does more than just sustain us. It is integral to how we celebrate our holidays and come together with our families. Food tells a story, and in the case of Hamizrach Glatt Kosher Restaurant & Banquet Hall, it is a very interesting story indeed.

Roman Yakobov and his family are Jews of Bukharian (Central Asian) descent. He grew up in Israel and emigrated to Canada with his family as a youngster. His parents opened the “Anton Restaurant” in the Bathurst and Steeles neighbourhood of North Toronto and Roman started a successful trucking company. He was living the “Canadian Dream.” But he felt that something was missing.

Rabbi Yacov Malayev was born in Russia into a non practicing Jewish family that made aliya to Israel when he was 11 years old. Rabbi Malayev went to a state run religious school and gravitated towards Judaism. He ended up studying at Yeshivat Shaarei Zion in B’nai Brak, eventually obtaining semicha – rabbinic certification. Feeling a need to give back to Jews of Bukharian origin, Rabbi Malayev moved to Toronto where he headed up the nascent Jewish Bukharian Community of Toronto (JBCT).

When he arrived in 2003, Rabbi Malayev relates, Jewish knowledge amongst those in the Bukharian Jewish community was not strong. Amongst the members of his community none of them kept kosher or observed Shabbat. So Rabbi Malayev embarked on an ambitious education campaign, including Shabbatonim (weekend retreats) where he would inspire and educate his community members about the beauty of Judaism.

On one of those Shabbatonim, Rabbi Malayev met Roman Yakobov who was one of the many who was inspired. Shortly thereafter, Roman decided to take on Jewish observance, becoming a baal teshuva.

To succeed in the endeavour Roman needed help. First he turned to his good friend and business partner Ronen Gilkarov to help manage some of the financial aspects of the restaurant. He also enlisted the help of his Rabbi, Rabbi Yacov Malayev who in turn brought in Rabbi Avraham Kahn to assist as well. Finally, after a time, Ronen turned to Rabbi Tsvi Heber, COR’s Director of Community Kosher to bring the restaurant under COR supervision. “We are all very happy working together,” relates Rabbi Malayev.

With the restaurant’s kosher status in order, the Hamizrach team was now able to focus on the food. They serve authentic Middle Eastern dishes including shawarama, falafel, shish-kebabs, barbequed steaks and lamb chops (Hamizrach’s menu is available here). Hamizrach also has Toronto’s only all you can eat kosher sushi for $17.99 per person (Hamizrach’s sushi menu is available here).

Hamizrach also offers the use of its banquet hall which seats up to 100 people for bar/bat mitzvas, birthday parties, sheva brachot, and any other type of event.

Reflecting on his 9 years as Rabbi of the JBCT, Rabbi Malayev sees a connection between his communal work and his role at Hamizrach. “When I came to Toronto, Jewish observance in my community was very weak. But now we have 100 families keeping kosher. 50 families observing Shabbat.100 public school kids now getting a Jewish education. And they are doing it because they see the beauty in our heritage, form a connection with our community and always have a positive experience when they come to our shul.” So too, Rabbi Malayev relates, if he has one objective for customers who dine at Hamizrach restaurant, it is that he wants them to leave happy. “If we could ask for one thing, it would be that every person who comes to eat at Hamizrach leaves full, and happy. What else could we ask for?”