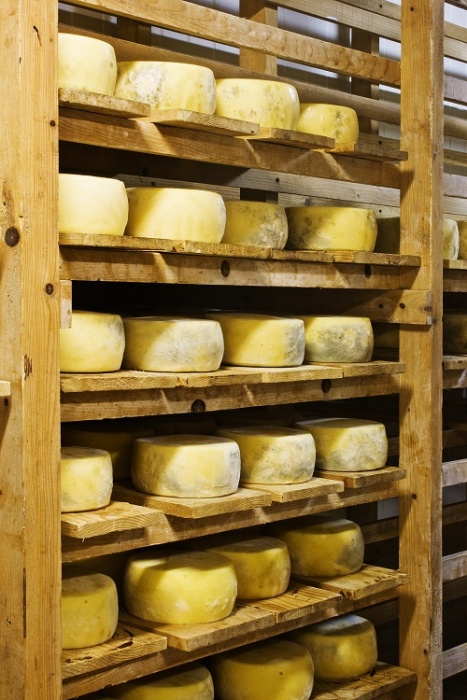 A halachik analysis of the requirements to make kosher cheese.

This article examines several issues that surround the kashrus of cheese-making; both historical and contemporary.

2. Why is there no concept of gevina stam similar to cholov stam[1] which, in North America, can be purchased without a hechsher?

3. Is Gevinas Yisroel that is made from cholov stam acceptable to someone who otherwise adheres to the strict guidelines of cholov yisroel?

4. Why do some companies produce soft cheeses under reliable hashgacha but not hard cheeses?

The Mishna[2] relates a discussion between Rabbi Yishmael and Rabbi Yehoshua while they were taking a walk together. Rabbi Yishmael asked Rabbi Yehoshua, “Why did they (Chazal) forbid consumption of a gentile’s cheeses?” Rabbi Yehoshua replied, “Since they (the gentiles) coagulate it using the skin of the stomach of an animal that was not slaughtered properly (animal rennet).” It is quite fascinating that a seemingly innocuous conversation between two Sages on a walk would become the source of a prohibition called Gevinas Akum whose ramifications would have a profound impact on our modern-day lives, many centuries later.

The prohibition of Gevinas Akum is fundamentally different than the prohibition of Cholov Akum. When it came to milk, Chazal were concerned about the possibility of a fraudulent act; that non-kosher milk may be used as a substitute for, or as filler in kosher milk. In order to address this concern, they imposed the highest level of supervision – yisroel ro’eh; meaning a Mashgiach who is in clear view – to milk production. Any milk produced by a non-Jew without this level of supervision is deemed not-kosher and termed Cholov Akum.[3] When it came to cheese, there was no concern that non-kosher milk would be used since it is not possible for non-kosher milk to coagulate.[4] Nevertheless, Chazal imposed superior supervision requirements on cheese production (details of which will be explained below).[5] Why was there a need for a special stricture on kosher cheese-making? Would it not be sufficient to monitor the type of rennet that is used and ensure its kosher status through frequent spot inspections?

Aside from the Mishna’s concern about animal rennet, the Gemara[6] cites several other possible explanations for this prohibition:

§ We are afraid that cheese might be infected with snake venom.[7]

§ There is a possibility that non-kosher milk would be mixed with the kosher milk and after coagulation remains stuck, together with the whey, in the cracks and crevices of the cheese.[8]

§ The cheese could be smeared with shuman chazir, fat of a pig.[9]

§ A cow’s rennet that has previously been salted in its milk (and therefore now prohibited as basar b’cholov) or even salted rennet of a chazir might be used to coagulate the cheese.[12]

It is intriguing to note both the number and the diversity of explanations offered to explain this prohibition. It almost appears as if the underlying reason for the prohibition was not disclosed nor was it well known to the people; even to the scholars who made numerous suggestions as to the reasoning behind it.

The Gemara relates that when Ula issued a ban in Ma’arava he did not disclose its reason until after the ban was in place for twelve months. He did this purposely so that the ban could be implemented effectively without negativity caused by naysayers who disagree with its reasoning. A well known Gemara[13] is codified by the Rambam[14] prohibiting a later Bais Din from absolving a ban or edict of an earlier Bais Din that had been adopted by the Jewish people; even where the reason for the ban or edict was no longer applicable.[15] It appears that Chazal’s reasons for issuing bans and edicts can be manifold and oftentimes beyond our comprehension. The opinion of the Rambam[16] and the Rashba[17] is that Gevinas Akum is treated as a prohibition that was ne’esar b’minyan – prohibited to the full extent and by the power of Bais Din; a ban that can no longer be absolved under any circumstances, even if the underlying reasons are no longer relevant.

Tosfos‘ view is that the prohibition on Gevinas Akum was not as originally widespread as we might have thought and was actually only implemented in places where infection by snake poison was a concern. As such, Tosfos argue that Gevinas Akum may be consumed in places where non-kosher ingredients are not used in cheese-making. Indeed the Geonai Narvona allowed Gevinas Akum in Narvona because animal rennet was not used at all there. Instead, cheese was coagulated using natural flowers. Tosfos concludes that, practically, since we do find some cheeses that use prohibited rennet, we should not be lenient.[18] The opinion of Ge’onai Narvona is a significant minority opinion and was never adopted by normative halacha which established Gevinas Akum as a prohibition which cannot be absolved even in cases where it is known that only kosher rennet is used.[19]

Technically, cheese is broken down into two distinct categories: acid-set cheese and rennet-set cheese. Acid-set cheese or soft cheese refers to cream cheese, cottage cheese, farmer cheese and other cheeses produced by adding bacterial cultures to milk. This results in the formation of soft cheese curds and whey. Rennet-set cheese or hard cheese generally refers to cheeses such as cheddar, mozzarella, provolone and hundreds of other types. These cheeses are produced by adding rennet enzymes to milk, whereupon somewhat firm cheese curds form, accompanied by liquid whey.

In addition to milk and rennet, various other ingredients are used in most cheese making. Cream or milk fat and non-fat milk powder are often added to modify the product’s fat ratio; vinegar may be added to adjust the pH of the milk prior to conversion into cheese and additional cultures and enzymes are commonly added to achieve various flavours as well as to prepare the milk for interacting with the rennet.[20]

Cheese that is owned by a Jew is considered to be Gevinas Yisroel and permitted for consumption as long as all the ingredients are verifiably kosher. Such Jewish-owned cheese does not require a superior level of supervision.[21] For rennet-set cheese that is not owned by a Jew, Rama requires that the entire cheese production be supervised by a Mashgiach.[22] The Shach goes further and requires that the Mashgiach must personally add the rennet into the milk.[23] Indeed, the policy of most major kashrus organizations, including COR and OU, is in accordance with the Shach.[24]

We can now understand why kosher cheeses are not as prevalent and usually more costly. In order to produce such cheese, a Mashgiach is required for the entire production and is often sent to live in far flung places where these dairy manufacturers are often located. His room, board and salary are paid for by the manufacturer which adds to the cost of the end product.

Rav Moshe’s famous heter allows for consumption of cholov stam – unsupervised North American milk – based on an argument that government regulations effectively regulate against illegal substitution of non-kosher milk for kosher milk which, in turn, can alleviate the requirement of superior supervision. Conversely and clearly, Government regulations do not address the gamut of concerns pertinent to cheese production.[25] There is no room to permit gevinas akum based on regulations and therefore the entire manufacturing process must be placed under the aforementioned supervision regimen.

Using the premise that non-kosher milk does not coagulate, we might suggest that even if cheese was made from cholov akum that was specifically marked for cheese production[26] it could still be considered as Gevinas Yisrael so as long as the cheese-making process is halachically supervised. Indeed, the Rama allows consumption of such cheese; although he qualifies the leniency as applying only if the cheese is already made i.e. b’dieved.[27] The Shach further qualifies this heter to apply only if; 1) The potential loss from relegating the cheese as non-kosher is significant[28]; and 2) the cheese in question is sold by weight or by unit and not by volume.[29] Rav Moshe Feinstein l’chatchila permits cheese-making using cholov stam as long as the cheese is halachically supervised; even for ba’alei nefesh.[30]

In order to determine whether soft or acid-set cheeses such as cottage cheese or cream cheese would be subject to the halachos of Gevinas Yisrael, it is necessary to first discuss an age-old controversy regarding the status of butter that is produced by gentiles. Butter is made by separating the cream component from the rest of the milk which happens on its own if the milk is not homogenized. Then the cream is churned which causes the fat globules to combine and solidify into butter.

If both milk and cheese are subject to the prohibition, then why would butter be different? Indeed, some communities adopted Chem’as Akum – a prohibition against purchasing butter of a gentile unless the process is fully supervised – from the start of milking until completion of the entire butter processing.[31] Other communities took a different approach and allowed consumption of chem’as akum, assuming the ingredients are verifiably kosher, reasoning that just as non-kosher milk cannot coagulate similarly it cannot become butter. Furthermore, since rennet is not used in the production of butter there is no reason to be concerned. They further argued that a prohibition against using chem’as akum was never implemented in a way that would bind all communities.[32] The common practice is to follow the lenient approach.[33]

It must be noted that while chem’as akum may not be an issue, one should not use butter without a reliable kosher certification. This is because there are several kashrus issues with the additives that are used in butter production including whey cream which may come from a non-kosher cheese production.[34]

Rav Moshe Feinstein[35] was asked whether acid-set or soft cheeses are subject to the prohibition of Gevinas Akum. The argument is made that since rennet is not needed for their production that they should have the same lenient status of butter. The Aruch HaShulchan[36] takes the stringent approach that all cheeses, even soft cheeses, are ne’esar b’minyan even if the reasoning does not apply. Rav Moshe essentially agrees with this strict opinion. Nevertheless, Rav Moshe states that one should not protest against those that are lenient. That said, many Poskim are lenient in this matter and allow soft cheeses to be produced without constant supervision. Such is the position of many national kashrus organizations.[37]

[37] See OU Document A – 132: footnote 26; and Document A – 162. The Star-K takes a stricter position and holds that a Mashgiach is required to add the acid to soft cheeses excluding yogurt which is not a soft cheese.