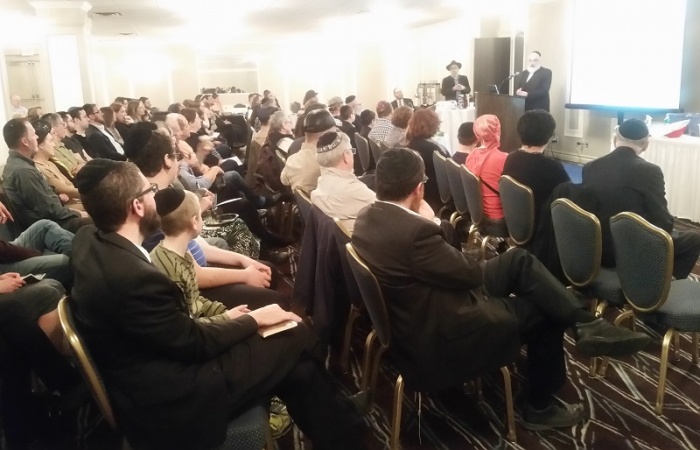 From Edmonton, Alberta to Toronto, Ontario, the Kashruth Council of Canada, better known as “COR” for their kosher symbol, has been educating kosher consumers across the country leading up to the holiday of Pesach.

COR representatives travelled to Edmonton for the city’s first ever pre-pesach community event. The COR delegation was composed of Rabbi Sholom H. Adler, COR’s Kashrus Administrator, Rabbi Dovid Rosen COR’s Pesach Specialist and a Rabbinic Coordinator, and Richard Rabkin, COR’s Managing Director. “At COR we partner with Jewish communities across Canada to act as a resource for all things kosher,” said Rabkin. “Whether it’s answering consumer questions, kashering peoples’ homes, or advocating on behalf of kosher consumers with our elected officials. We at COR feel that all Jewish communities across Canada should have equal access to kashrus resources and that is why we decided to come to Edmonton.”

The event was held in a conference room at the West Edmonton Mall, the largest shopping mall in North America and was attended by over 125 people from the Edmonton Jewish community. It received the strong support of local Edmonton rabbis including Rabbi Ari Dreilich, Executive Director of Chabad of Edmonton, Rabbi Daniel Friedman, spiritual leader of Beth Israel Congregation and Rabbi David Laufer, the Director of the Edmonton Kollel.

Edmontonians were treated to a selection of complimentary appetizers followed by a PowerPoint presentation by Rabbi Dovid Rosen outlining the most frequently asked Pesach related questions. The second half of the evening was a seminar demonstrating how a COR mashgiach cleans and checks produce to ensure that it is insect free and how to apply these techniques in the home.

In Toronto, the Aish Thornhill Community Shul hosted the COR for the Toronto community event with a crowd of over 150. In opening remarks, Mora D’Asra Rabbi Avraham Rothman commented that he had just received a complaint from a congregant who was upset when he returned from Pesach shopping at one of the big box retailers as he realized that one of the products that he purchased from the “Passover Section” said in small writing on the packaging “kosher year round, excluding Passover.” “We should all be vigilant when shopping and when possible, we should shop at stores that have COR hashgacha as we all know that we can rely on the COR to look after many of these issues for us,” said Rabbi Rothman.

In Edmonton, in closing remarks, Rabbi Daniel Freidman of the Beth Israel congregation commented, “Over my years in the rabbinate I have made an interesting observation: the people who ask me the most kashrus questions are usually the ones with the highest kashrus levels in their kitchens. Kashrus questions come up daily and we should never be afraid to ask. That is why we are so fortunate to have the COR here with us tonight, and to answer our questions throughout the year as well.”

The feedback from those in attendance in both Toronto and Edmonton was overwhelmingly positive but perhaps the most significant feedback came from Edmonton’s Rabbi Friedman, who two days after his community’s event sent the following text message to the COR: “Since Sunday I have already been approached by two people who want to kasher their kitchens and toivel their dishes. Yashar Koach!”