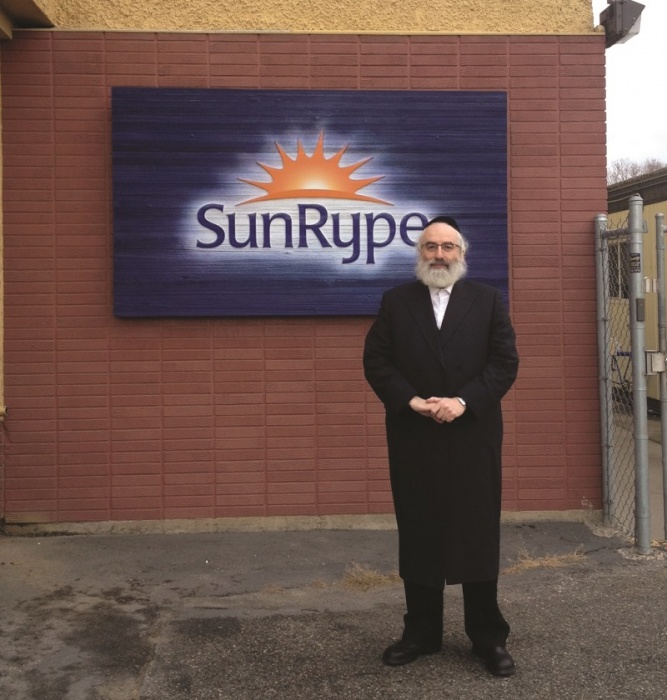 How does a company actually become kosher? This is a question that I often receive in my capacity as Director of Industrial Kosher of the Kashruth Council of Canada (COR).

On the surface, the answer is relatively straightforward. First, we ask the company to upload a list into our online database of their ingredients and products which they manufacture in their plant. We ask them to supply (or we assist them in locating) kosher certificates associated with each individual ingredient. Once this is complete, one of our senior rabbis visits the facility to confirm that everything that is happening in our online database is happening in real time in the plant. If there are any issues that need to be resolved such as ingredient substitutions, or if equipment needs to be kashered, we work with the company to complete this task in a way that works with their production schedules. After this is done, the company signs a contract which enshrines their responsibilities to their kosher program into a legally binding arrangement, and the company is now COR kosher certified.

It sounds pretty straightforward. Often times it is – we have some companies that have become certified within a month. But sometimes it takes longer than that. In the case of a company called Sun-Rype Products it was much longer.

SunRype is located it Kelowna, British Columbia and produces fruit juices and dried fruit snacks. They trace their history back to the 1940s when they began as part of a local fruit growers co-op.

They were aware that they had an issue that required addressing as they were using non-kosher grape juice in fruit snacks that they wanted certified as kosher. They also produce fruit juices, two of which contain grape juice (I will explain later how this can affect the kosher production of fruit snacks even if they are not produced on the same equipment).

Initially, we gave SunRype two options: buying kosher grape juice concentrate or eliminating it altogether. They decided to buy kosher concentrate but quickly realized that there was a significant cost difference, so ultimately, they decided to eliminate the grape altogether. Instead they replaced it with pear juice which is actually less expensive than non-kosher grape juice and has a similar taste profile. As SunRype’s kosher certifier, we were pleased with this decision as it would make the administration of their kosher program easier as we would not have to enforce strict controls on the kosher grape juice consumption as they would have both kosher and non-kosher grape juice, albeit in different parts of the plant.

The main challenge that we faced was in kashering the equipment as it all became non-kosher due to the non-kosher grape juice that was being used. Kashering in this instance was achieved by performing hagala, which means boiling out the equipment using water at a temperature of 100 degrees Celsius. The kettles that concentrate the product were relatively straightforward as we could fill them up with water easily and boil them out. The real challenge was how to kasher the chain link belts and the poly belts that carried the product from one stage to the other. These obviously carried hot (non-kosher) fruit on them. I explained the issue and what we required in order to kasher the lines and the SunRype team devised a hose that would spray hot water on the chain link belt. We made sure to count two rotations to ensure that the belt went through the hot water. As luck would have it, the polyethylene belt had become worn so Sun-Rype decided that it was time to replace it, so kashering here was not necessary.

The greatest challenge was that Sun-Rype still had a fair amount of fruit bars left over from previous production that contained very small amounts of the non-kosher grape juice. As a result, we would have to wait until all of the old stock was used up. This is one of the reasons why the certification process took so long.

Sun-Rype used a meticulous excel spread sheet to keep track of where all the products were used and when they were sold. I checked the spread sheet and the inventory every two months for close to two years. Finally in December 2015 it was all clear! We kashered the equipment again just in case they used it with some old products.

As I indicated above, there is another side of the facility where Sun-Rype presses apples for apple juice. They also add other juice concentrates to create various other fruit drinks. The concern we had was that two specific drinks contained grape juice. Even though the kosher products do not get processed on the same equipment, they do share steam and this poses a kashrus issue

To explain, the boiler produces steam in order to cook the product. This steam is delivered to the actual outside of the kettle jacket (the jacket surrounds the kettle). In the process of the steam heating the product (through the stainless steel kettle wall) the product cools the steam in the jacket which causes it to condense and becomes water. Warm water that circulates back to the boiler is turned into steam. This is an important technique that helps manufacturers save both water and energy. Since Sun-Rype uses grape juice in the plant and they will be using steam to cook the fruit bars there was a concern that the equipment used to cook the kosher fruit bars might be contaminated by the non-kosher grape juice in the steam. In order to come up with a definitive determination, I needed to calculate the precise amounts of grape juice used in the plant and how often. Fortunately, I was able to confirm that the amount of non-kosher grape juice was batul (nullified) and had no negative impact on the steam in the boiler as the rest of the facility was using much more steam than the minimal amount of non-kosher grape juice being used on the juice line. Unlike other issurim, non-kosher wine and grape juice becomes batul at a ratio of 1/6th. COR would not certify a product on this basis, but this nullification is suitable when dealing with steam that is heating the equipment – not the actual product itself.

So, after almost three years of hard work from the teams at both SunRype and COR, we were able to certify many of Sun-Rype’s products as kosher. And that’s how a product becomes COR kosher certified!