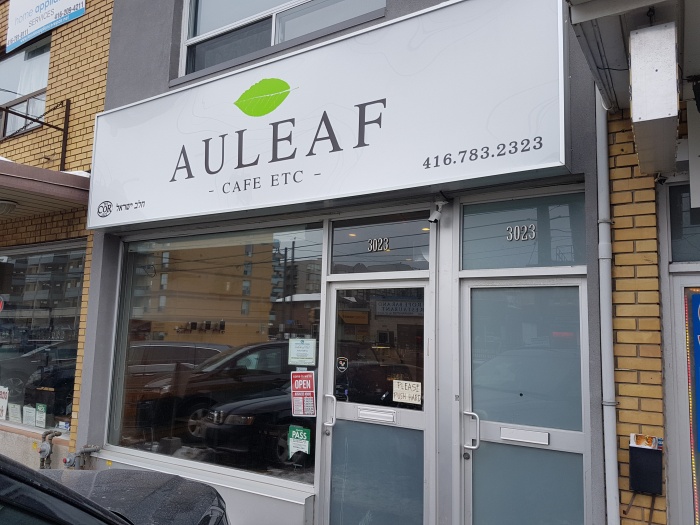 At some point in her early years, Maytar Elgaza started picking up on the challenges that large families face when it comes to obtaining the basic necessities that living an Orthodox life demands. With multiple tuitions to pay, seminaries, kosher food, and simchas – not to mention all the expenses that everyone has, such as a mortgage, cars, and insurance, even with both parents working, it seemed like her family was drowning at times.

Being the eldest, she felt it was her duty to take on part of this burden. So she eagerly waited for the time that she could finally be independent, have the means to help anywhere she could, and ultimately build a secure foundation for herself and her future family. So she opened Auleaf Café – a dairy and health restaurant in Toronto.

We asked Maytar to give us some background on her dreams of opening a café and how they compared to the reality of managing one:

On how Auleaf was born:

“Even as a child, I was always fascinated with the concept of supply and demand. Understanding what lacked in an area and striking a deal to fill that niche was always a thrill of mine. It started with me compensating my younger sister with candy in return for her cleaning my room, to selling popsicles on hot days at camp, to finally landing a sales job for a reputable company.

“When I exposed myself to a lifestyle of working full-time, there were many patterns that I picked up on. For example, I noticed how my most successful sales never took place in the office, but rather in places where I felt my happiest – in some quaint café, over a nice, hot latté, away from the corporate hubbub. Perhaps it was the environment that made the potential client feel at ease and more acknowledged, or maybe it was the strong coffee and the soft background hum that gave me the confidence to lead the conversation. Either way, it helped me thrive, thus becoming my signature.

“I became more and more selective each time when choosing the café to conduct my meetings. The coffee had to be perfect, the décor needed to be warm and inviting, and the ambiance had to be on point.

“But being at cafés for so many hours at a time and having almost zero kosher choices, it became seriously challenging to keep myself healthy and energized as I worked. I grew frustrated at the idea that I couldn’t find a comfy little spot in my area. I started daydreaming of ideal situations where I would find the coziest place within the kosher community – one that served coffee how I like it and offered healthy choices and quality food. A place where I would be welcomed and feel most at home, not too far from home.

“I explored that idea for quite some time until I knew exactly what I wanted to devote myself to. I dismissed the risks, threw everything aside, and started working on square one of building my business.”

“Auleaf is an intimate café that offers fresh, healthy, quality alternatives to the standard kosher fare. We take pride in our premium-blend coffees, all-day breakfast, and the wide selection of ingredients that we offer our customers to choose from when building their entrées. When entering Auleaf, your senses are met with a welcoming, cozy décor, a warm greeting, carefully-selected music, an aroma of fresh food and coffee, and an overall home-like, inspiring atmosphere.

“Auleaf Café is about creating a community of people who care deeply about the food they fuel themselves with. From healthy salads and plant-based lunches to hearty breakfasts, cheesy paninis, pancakes and guilt-free frappes, Auleaf caters to everyone’s needs and cravings! We work hard on building the right meal for you, and just how you’d like it.”

On facing criticism and age stereotypes:

“When I first opened, in fall 2016, I had only just reached my 20th birthday, and I was well aware that my age and lack of experience would be something exceptionally visible to everyone I was going to interact with. When I first started, there were those who doubted or second-guessed my desired outcome, or would evaluate everything that I’d done and proceed to tell me to no end how they would have done better. Some people that I needed to have business exchanges with wouldn’t take me seriously because of my age, and when an idea would fail, I was told that it was because of my obvious lack of experience, and that I should give it all up and look for something to do that was more traditionally expected. I had to constantly remind myself that all criticism is constructive, and I trained myself to take any negative word as motivation to prove my capabilities to the world and, most importantly, myself. I pushed myself to show results, since I’ve learnt that it becomes much easier to gain someone’s trust once you can demonstrate the value of what you’re doing, and I kept on going.

“But I must point out that there were only a handful of times that I ran into these issues. I’ve received an overwhelming amount of support from my friends, family, and the general community, and I chose to listen to that instead, which in turn was what helped me believe in achieving this dream. I am forever indebted.”

On managing, hiring, and being a boss:

“When I was younger, ‘Be your own boss’ was a glamorous phrase to me, and I wanted to live by it. Now that I’m here, it is far from glamorous. When I became a boss for the first time, I did not have the slightest idea of what the responsibility consisted of, and what the word ‘authority’ actually meant. I’d hired some staff that were my age, and some that were 20 to 30 years my senior. In the beginning, it was hard for me to accept and understand where I was on the pyramid. When it came to employees who were my own age, I made the mistake of making friends with them too quickly, and when discipline was crucial, it was exceptionally hard to say what needed to be said, as the respect wasn’t there. When it came to managing my older staff, I felt that since I hadn’t yet encountered life as much as they have, I was in no place to see them eye to eye. I felt uncomfortable giving orders and calling them out if I wasn’t satisfied with something.

“As one can imagine, this made managing my business completely and utterly impossible. I had to pull myself together and start over; I approached my staff with a different attitude, and although it came out of the blue for them, they became accustomed to it and ultimately accepted it. I’ve also made it clear to anyone I’ve hired afterwards exactly where I stand in the business, and that my age does not play a role.

“One important lesson that I learnt is that reciprocity is the basis for confidence-based trust. I show my staff the utmost respect – I give them privileges, take their complaints and concerns seriously, prioritize their comfort, and make sure they feel acknowledged. I also understand that although I’m the boss, I do not know everything, and that at certain points I too am part of their team. I found that this system minimized my weaknesses and provided a healthy and peaceful atmosphere for my business and my staff.”

On working with COR:

“Just like foods have a nutritional value that fuels our body, so too does it have a spiritual element that infuses our soul. I couldn’t feel more blessed, knowing that I’m in a position where I can feed holiness to Am Yisrael. Seeing benchers on every table right after the breakfast rush, I get all the more strength to do what I’m doing. I genuinely believe that the more effort I dedicate to making my café as kosher as can be, the more G-d-given blessing I will receive in return.

So ‘What is the kosher program’s importance to my company?’ you ask?