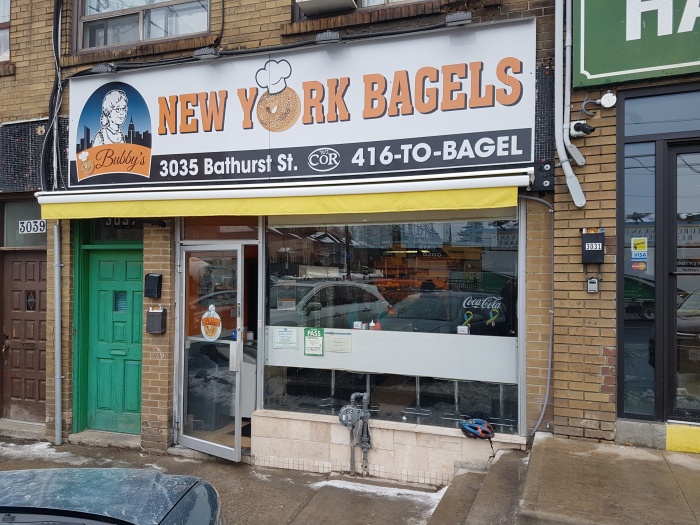 For such a big Jewish community, it was always so surprising that Toronto didn’t have a real, authentic kosher bagel place. What food is more Jewish than bagels?

Bubby’s, which launched in May 2016, prides itself on being the only place in Toronto where you can get an authentic New York-style bagel – in 30 different flavors – baked fresh on the premises every day. They specialize in breakfast and lunch foods, such as eggs, coffee, sandwiches, salads, soups and Paninis. They also produce Shabbat dips and an extensive line of almost 20 different varieties of herring. They pride themselves on the fact that anyone, regardless of income level, can leave the store feeling satiated without breaking the bank.

We sat down with Simcha Breslow, co-owner of Bubby’s Bagels, to find out where the business came from and what the challenges are in keeping it running:

“Sruli and I came together from separate places to make this happen,” he says.

“I’m a big foodie, and I’m super passionate about bagels. I was 26 when we started, and, up until that point, I’d never had a real bagel in Toronto. All we could find were ‘rolls with holes’.

“I had never really understood this, considering the size of the Toronto’s Jewish community. I married a girl from the U.S., and every time we’d go down to visit her family, I’d buy roughly 6 dozen bagels, it was all we had room for, and bring them back to keep in the freezer.

“I had recently returned to Toronto after five years living in Israel, and I was trying to find a job that I was passionate about. Sruli Portowicz and I had been friends for years, and he approached me about opening a breakfast joint and having me manage it. I was nervous about going into the food industry, because Toronto has a bit of a checkered past in terms of supporting food establishments, but I was intrigued by the prospects.

“Sruli was more focused on the breakfast angle, but I didn’t think that was enough. I told him that if we were going to do this, we had to go all out; we needed to have the best bagels known to mankind. And we set out to accomplish that.

“Sruli Portowicz is a true entrepreneur at his core. He’d moved to Toronto a few years before I did and almost immediately started opening various businesses that the community had a need for. He started out with a homemade salad-and-dips service out of his kitchen, launched the Toronto Family Magazine, and opened The Hat Box Toronto. During this time, he also became a certified Hatzoloh member and a well-known figure in the community.

“But Sruli wasn’t done. From the perspective of a frum guy from Brooklyn, it made no sense to him that in a city as big as Toronto, there was nowhere he could go to grab a quick breakfast. But considering how many baskets he had his hand in, he knew he needed someone to run the business with him. That’s where I came in.

“A lot of thought went into choosing the name Bubby’s Bagels, but we wanted something Jewish, traditional, and catchy. Also, my Bubby’s maiden name was Beigel.

“We hit a lot of challenges at the beginning:

“CHALLENGE #1: Neither of us knew anything about making bagels, let alone truly great bagels. We had to learn everything from recipes and production to designing and operating a fast-paced takeout restaurant. We tried getting local bakeries to produce quality samples for us, but that didn’t go anywhere, so we took a trip down to the U.S. to personally meet some people who’d had success in the industry, and with a lot of help from G-d and the COR, everything came together.

“The COR, by the way, is excellent to work with. They are reliable and reachable anytime, day or night, if we have any questions. They’re very supportive of the kosher establishments, and we’re grateful for everything they do for the community at large.

“CHALLENGE #2: The store took longer to set up than we’d initially wanted, so we were pretty eager to get started even though we weren’t fully ready. Better to just get moving than to keep endlessly pushing off our opening date. We set out to start with a sort of ‘soft launch’ where we would practice our operation and work out the kinks so we could implement permanent systems for when we’d actually open to the public. We teased our soft launch a bit to get the community excited, but we intentionally chose not to advertise it so as to not overwhelm ourselves with a deluge of hungry Jews.

“The first day we opened was the first time I’d ever baked a bagel in my life. While at that point I was well-versed in how to make them, I had never tried it myself. But the minute we opened the doors, we had a line out the door with people freaking out that we had no schmears to put on the bagel, no real system for serving the customers, and employees that were learning to use the digital payment system for the very first time. We had to run out, with people standing there, and buy a lot of cream cheese.

“In the days that followed, we quickly produced a bunch of different schmears and sandwiches and released a trial menu while we got our feet wet. We tried explaining to every customer we served that we were in a soft launch and weren’t fully set up, but I know for a fact that many people didn’t understand what that meant. We owe the deepest gratitude to Hashem and to the community’s patience and understanding, because without it, we probably wouldn’t be open today.

“CHALLENGE #3: We’d finally gotten things in gear and were settling in, when one day, about seven weeks in, the fire department was called to the plaza about an issue at one of the apartments above the strip mall. A tenant that lives above our restaurant claimed to be having medical symptoms of a respiratory nature. This same tenant, we later found out, had been calling every possible government department to lodge false complaints about us in an attempt to have us shut down.

“We’ve since confirmed that we were not actually causing an issue at all and that her ‘symptoms’ were an act. But in the course of their due diligence, the firefighters looked around all the shops in the plaza for irregularities, and they found that our store’s ventilation system was not properly set up for the types of equipment we were using.

“The fire department called in the building inspector, who immediately shut us down and locked our gas meter. It turns out that the contractor we’d hired had badly misled us as to what we required and cut corners everywhere, and we couldn’t have known about such a thing without someone bringing it to our attention. We thought it would be a simple, relatively quick job and that we’d be up and running again within a week or two. We had no idea what we were in for.

“In short, we were closed for nearly four painful, worrisome months as the engineers, building permits, equipment, and contractors slowly came together to fix what was a massive job. We had to completely redo our entire ventilation system. The ordeal nearly bankrupted us, and all the while, we were inundated with questions from everyone we knew about why we were closed and what was going to happen to Bubby’s Bagels. The daily rumor mill had us concerned at first, but eventually it became a source of comedic relief as the theories regarding our sudden closure devolved into utter absurdity – fires, partnership infighting, building issues, and so on. None of it was true.

“But we did learn a lot from our challenges. We learned that simply being open for business is a major blessing. When we had to close down for a few months, I spent many weeks working in the storefront on paperwork, planning the construction and logistics, temporarily halting all of our subscriptions, and even though I knew in my heart that we would be okay, it was depressing to sit there and look out at the people who would peer through the front door wondering what was going on and what had happened to us. And now, any time we have a tough day at the store or a challenge arises, I simply look out that front door and remember when it was shut and all the lights were off and the store was silent, and how truly difficult a challenge that was. Once you overcome a challenge like that, everything else pretty much pales in comparison.”