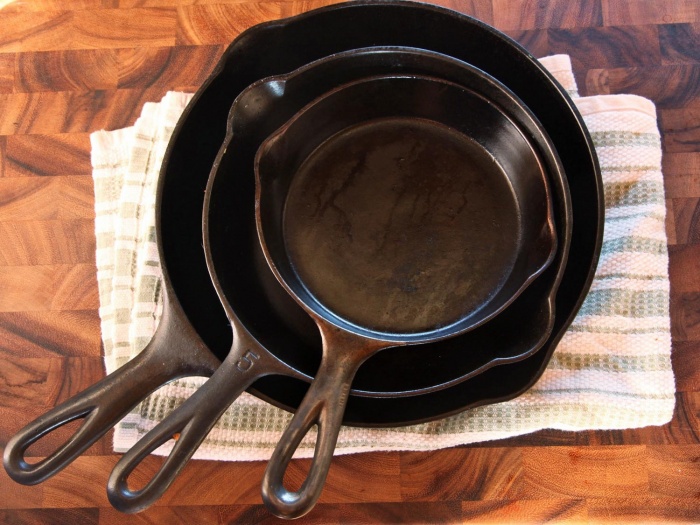 Cast iron cookware requires seasoning or coating with oil to prevent rusting and to provide non-stick properties. Although traditionally the consumer would do the seasoning, at present most cast iron cook-wares are pre-seasoned by the manufacturer. The seasoning process involves coating the surface with an oil or fat, and heating to high temperatures (600F) until the coating turns black.

Since we do not have information regarding whether kosher oils were used for the seasoning process, we need to know what koshering process, if any, is required. Firstly, we need to know if the coating is considered absorbed, or whether it is a substance on the surface, that must be removed prior to kashering. Secondly, is the absorbed flavor kashered through hagala or libun chamur?

There is a מחלוקת הפוסקים regarding a treif liquid that was absorbed in a pot. Sha”ch 121:8 quotes a תשובת מנחם עזריה that if the treif liquid was absorbed without a kosher medium, libun gamur is required. Chazon ish Y.D. 44:4 brings that most ראשונים hold that an absorbed treif liquid is koshered by hagalah.

Rema O.C. 451:4 says that anything that needs hagala can be koshered with libun kal, therefore, since the pan had been heated at the factory, perhaps no further koshering is needed. Additionally, regarding the oil on the surface, it appears to be burnt, to the point of being nifsal meachila, and therefore not of concern.

We showed a new pre-seasoned cast iron pan to Rav Miller. We had removed some of the coating by scraping/sanding. Rav Miller said that the remaining black coating would be considered nifsal meachila, as it was totally burnt black. Also since the ikur din is that libun kal suffices for a liquid blia shel issur, the new pre-seasoned pan would not require any koshering, as the factory already heated the pan sufficiently. Some would be machmir (to take into account the תשובת מנחם עזריה) and do libun chamur by running through a self-clean cycle.

For details on how to make used cast iron cookware kosher, click here.