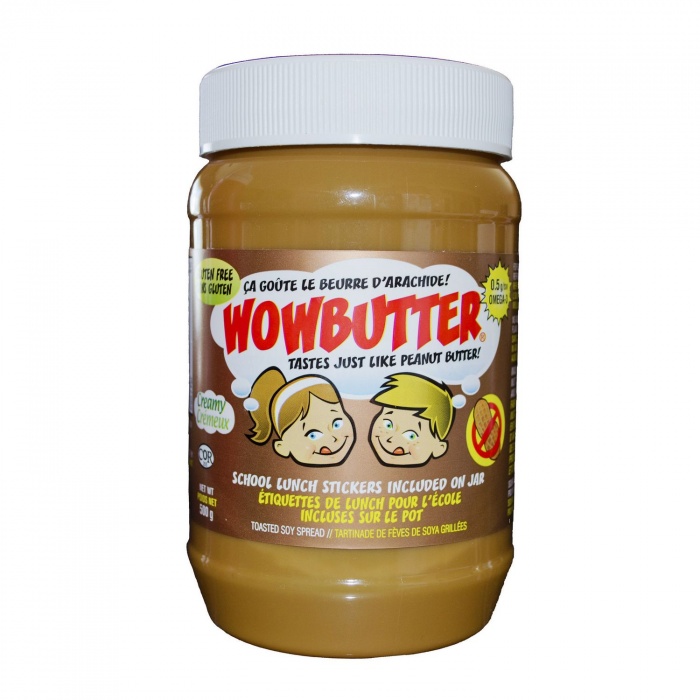 For many, the peanut allergy is an airborne thing, so it’s not just about being careful not to eat anyone else’s lunch – it’s about being careful not to be in the same room as someone eating his own lunch. Those with the allergy can have severe anaphylactic reactions from ingesting even the smallest trace amount of peanut protein left behind on a table or on the hands of a person who just finished consuming a peanut product. And as such, many institutions – and schools in particular – don’t allow it. You can’t eat peanut butter in public anymore. So for many people, it’s always a challenge to ty to look for something pareve to put on sandwiches that is shelf stable and does not smell like fish.

Enter WOWBUTTER. WOWBUTTER is the brainchild of the Mahon family of Staffa, Ontario, who, when they had allergy problems within their own family, turned their oat-processing plant, Hilton Toasted Oats, into a venue to try to find a suitable peanut butter replacement. Their goal was to create something that was basically indistinguishable from peanut butter, except in terms of allergies—just as tasty and maybe even a little healthier.

What they developed was a multiple-award-winning peanut and tree-nut free spread called WOWBUTTER, using mostly soybeans that they grow themselves. WOWBUTTER is made from only five ingredients: toasted soy, pressed soy oil, cane sugar, palm oil, and sea salt. Their product is a complete protein source, containing all 9 essential amino acids necessary for building and maintaining muscle mass. (Peanut butter itself only has 6). It’s also a natural source of Omega-3 (which peanut butter is not) and is made without the use of hydrogenated oils, colours, flavours, or preservatives.

As Scott Mahon, president of WOWBUTTER, says, “I could never sell something that I wouldn’t feel good about providing to my own children!”

Their main goal was to develop a product that was safe for schools and that tasted like peanut butter. According to Connie, one fan of the product, “I made cookies with WOWBUTTER because I am allergic to peanuts. I also made some with peanut butter because my kids and hubby can eat it. Wouldn’t you know, they ate mine because they said it tasted better!”

“I can’t believe it’s not peanut butter!” people are saying.

Not COR though. We’re mashgichim, and it’s our job to verify ingredients. So we believe it.

One of the company’s biggest challenges, Scott says, is that it’s dwarfed by other companies with more products and larger marketing budgets. WOWBUTTER has no other products. Instead of diluting their limited resources toward making multiple products that are just “adequate”, they have one product, and they’re constantly working on perfecting it. For example, they recently switched from clear jars to colored jars, which keeps more light off their product and helps it retain freshness for longer. Their goal is to do one thing and do it well, and they’ve succeeded—to the point where initially, some schools started banning WOWBUTTER because it looks too much like peanut butter!

So the company figured out a solution. They created a dual-layer label for their jars, the inner label consisting of smaller “Made with WOWBUTTER!” stickers to stick to your child’s lunch container, showing that there are no nuts in your child’s lunch. Their own little hashgacha stickers, if you will. They’re also creating a “To-Go Cup” containing one serving of WOWBUTTER, pre-sealed, that can be taken to school without making anyone nervous.

Their product also has COR certification too, of course. “Due to the fact that our entire facility is dedicated to only making WOWBUTTER and that we only have 5 simple ingredients, there isn’t a significant amount of time needed to maintain kosher certification,” Scott says. “There are many consumers who are actively looking for kosher products, and it’s always been important to us that we could make WOWBUTTER available to them.”

Sometimes it pays to be simple. Less is more.