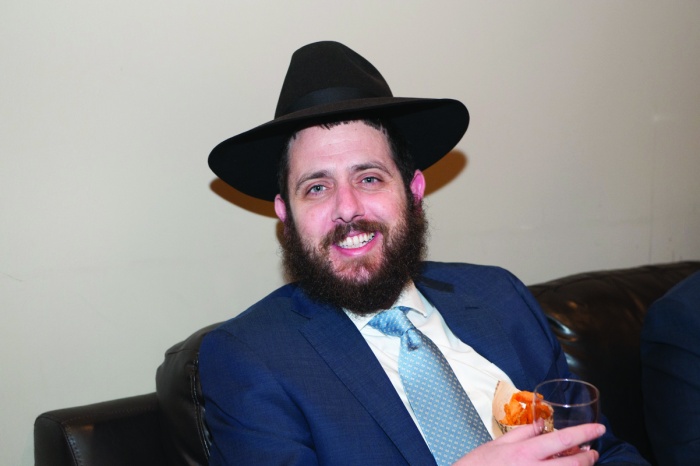 COR’s Senior Mashgiach, Mendel Gansburg, may not have known any English when he moved from Israel to Canada, but he did know that his mission was to help people eat kosher food.

Reb Mendel Gansburg’s family has a long history of promoting kashrut. As a member of Chabad, his father’s father was sent after the Second World War by the 6th Lubavitcher Rebbe, the Rebbe RaYYaTz, to be a shochet and shaliach in Italy. And in fact, he was the only shochet in Italy for many years.

His mother’s father was a Holocaust survivor from Poland.

“I heard a very interesting story about him from my mother,” Mendel says. “When my grandfather was in a camp in Siberia, they didn’t have even one pair of tefillin, but he and his friend heard that in another camp, they had 2 pairs. So, they escaped from their camp and set out walking for a long time to get the other pair. They stopped to sleep in this one house, and their non-Jewish host made them a delicious chicken dish with butter. My grandfather later told my mother that he could still remember the smell of that chicken… But obviously, they had the mesiras nefesh not to eat it, even though they were very hungry and were in constant danger of starvation.”

Though Reb Mendel grew up in Israel, a place where it’s not that hard to keep kosher:

“My parents were sent to Tzefat by the [most recent] Lubavitcher Rebbe, זצק”ל, in 1978, and afterward they moved to Nachalat Har Chabad (Kiryat Malachi).”

Both of his parents work in education, using their roles to bring Yiddishkeit to hundreds if not thousands of children and teens.

But Reb Mendel always found himself being drawn to kashrut.

“I worked in different places in the world as a mashgiach before and after my wedding,” he recalls, “Yam Hamelach, Prague, New York, and even a jail in Israel – and I feel a tremendous merit and responsibility in doing so. I constantly daven to Hashem that I’ll be a good shaliach and do my job properly.”

So when he moved to Canada with his wife in 2005, it was a no-brainer that he should become a mashgiach. As Rabbi Tsvi Heber, COR’s Director of Community Kosher, puts it, “When Reb Mendel came to the COR, approximately 12 years ago, as a new immigrant from Eretz Yisrael (he is a Canadian citizen, as his mother is Canadian), he impressed me immediately. He has tremendous siyata d’shmaya, and uncovers issues that others miss. This is because he is thorough and very patient, and because he views kashrus as his mission. Shem Shamayim is constantly on his lips.”

Reb Mendel is a Senior Mashgiach, which is very different from a Route Mashgiach, in that he gets to comb through each establishment more thoroughly – sometimes for an entire day or more – but has the freedom to do so, because he doesn’t have to visit every location every day.

As Reb Mendel puts it, “When I do a long inspection, I can see the full operation of the place. For example, I can see how they make the food from start to finish. I like to train myself to understand every ingredient – smell it, taste it – and understand how it’s used. I also take the time to go over the menu and ask myself how they make every dish so I’m familiar with the ingredients that they need. For example, if a mashgiach knows that a certain pasta recipe is made with heavy cream, then, for example, there was one time that Toronto had a shortage of heavy cream, then in that case, it’s beneficial for the mashgiach to know about it so he can communicate with the chef as to how they’re going to find a solution.

“Another benefit of a long inspection is that I can see that what the establishment sells makes sense when compared to what it receives. I focus especially on meat, poultry, and cheese. They’re important because they’re the most expensive ingredients, and the difference between kosher and non-kosher is very big, money-wise, especially when we’re dealing with large volumes of each, and there’s a big temptation to substitute one for the other, chas v’shalom. So I see, for example, how much meat a restaurant puts in every shawarma, how many shawarmas they’re making every day, and how much meat they ordered to accomplish that. With pizza places, I see how much shredded cheese is going on every pizza, how many bags of flour they use, and so on.

“I also have more time to look for bugs in unexpected places. For example, at one of the establishments that keeps lots of products like pasta in storage, I found bugs in many closed pasta boxes.”

When asked how he catches these things, he replies, “I try to daven to Hashem every day for hatzlacha for all the people that are involved in kashrut, that we shouldn’t make any mistakes or miss anything. I also try to say a chapter of Tehillim before I go to places, and I see a big siyata d’shmaya from that. I know of many other mashgichim that do the same.”

“One of the challenges when I come to a place,” he says, “is that some people get very nervous because I might find a mistake. I explain to them that I’m there to help, and I’m sure they’re all doing their best to keep everything kosher, but because they have so many other responsibilities and I’m focusing only on kashrut, it’s beneficial for all of us to once in a while have a long and detailed inspection.”

Then he tells them a story: “One time, I went to one of the restaurants, and I saw a bag in the area where the food was. I opened it because I thought that there might be food inside, and when I looked in the bag, I saw diamonds and a watch. When I told the owner about it, he was shocked. This was worth about $50,000, and the owner never even knew that he had it in the restaurant. So you never know — maybe after a good, thorough inspection, I’ll find a treasure here too!”

There are downsides to his not being from around here, of course. The language barrier was a big challenge, but he picked it up slowly, one word at a time:

“I remember back when I was a mashgiach in a restaurant in Manhattan, and they asked me to answer the phone calls one day, a customer called and asked if we have duck on the menu. I didn’t know what duck was, so I asked, “What is duck?” And he started making duck sounds into the phone.”

But there are upsides to his situation as well.

According to Rabbi Heber, “As an Israeli himself, Reb Mendel understands the Israeli psyche. That goes a long way, since many of our proprietors are Israeli too.”

Reb Mendel agrees: “The fact that I’m from Eretz Yisrael makes part of the job easier for me. In Israel, the kashrut industry is huge, with thousands of mashgichim, and it’s very easy for me to contact people there and to get the information that I need.

“Also, when I visit Israel, Rabbi Heber sometimes sends me to some of the big factories that our products come from – products that already have a hashgacha, but, when they come to Canada, also get a stamp from the COR. Rabbi Heber wanted me to check on them so he could decide if they reach the COR’s standards.”

“Ultimately, I see kashrut as a work of shlichut (a mission),” he says.

“At some point, I was working in the airport where they make all the food for the airlines. One time, my friend who was flying asked me to put something on the tray on which he’d gethis kosher meal, wrapped along with the food. I put a booklet inside with divrei Torah in it. B’hashgacha pratis (with Divine providence) my friend sat in the wrong seat and an irreligious woman received his meal and started to read the booklet. Then she realized that the food and the booklet were supposed to go to another person. She found my friend and told him that she was on the way to a funeral for two people that passed away unexpectedly, and when she read the booklet, she found answers to a question that had been bothering her. She wanted to keep the booklet.”

He also once met a chef in his 40s who’d never had a bris milah and convinced him to go through with it. But it’s not just about the stories.

“I feel a big responsibility,” he says. “The kashrut job is not a regular job. Everyone that is working in hashgacha has the merit that when he is doing his job properly, every Jew that eats that food is keeping the Torah’s mitzvos. This affects every Jew, from a baby to an old person.”

Ultimately, he sees it as his family coming full circle, from not eating non-kosher in Siberia in the cold to ensuring that other people do eat kosher.

“We know the passuk in Tehillim says, מהשם מצעדי גבר כוננו – every step that we do in this world is b’hashgacha pratis from Hashem. I know that Hashem sent me to Canada for a reason.”