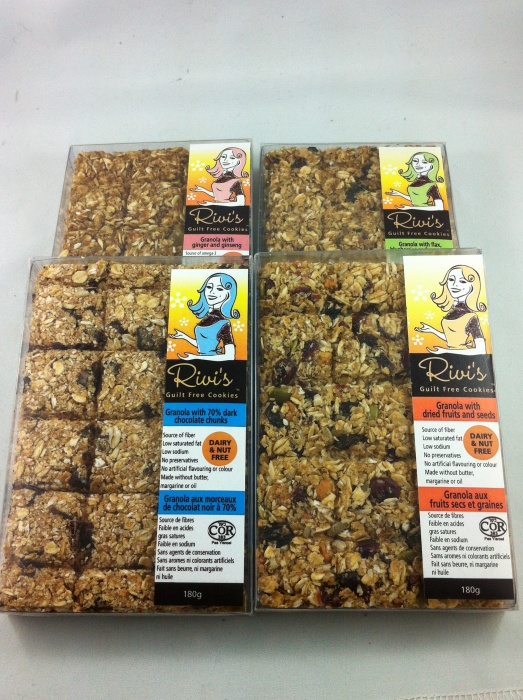 A story behind a story. That’s what you will find when speaking with Rivi Horwitz, founder of Rivi’s Guilt Free Cookies. Not only does the company itself have a backstory, but Rivi has a story herself.

Her story starts out in Israel, on Mount Carmel, where Rivi was born. She describes her vivid memories of growing up hiking in the mountains, working on kibbutzim picking ripened fruit and cotton, and watching the stream of tourists visit the nearby Haifa port.

But not all of her memories were of a carefree childhood. Wartime left an indelible impression on her as well. As Rivi recounts, “I remember being in a gathering of friends outside of the school one morning, when suddenly we heard an explosion in the near distance. Looking up at Mount Carmel we spotted my friend’s house up in smoke.” During the Yom Kippur War and the 5 months following, while still in school, Rivi spent her nights volunteering at the Rambam Hospital, in both the burn unit and orthopedic ward. She also served 2 ½ years in the air force.

A few years later, her story continues. Rivi’s husband was a player for a local Israeli soccer team. A mid-fielder on his team suddenly collapsed on the field during one of their games. As Rivi explains, “Not taken very seriously, it was to all the players’ shock when he passed away that same afternoon having suffered a heart attack. Influenced by what they saw, the teammates scheduled visits to their doctors for long overdue medical checkups.” Rivi and her husband decided to do the same. Though young and slim, Rivi felt her own examination necessary, since she had recently given birth to her third child.

To her surprise, the tests revealed that Rivi had a dangerously high level of cholesterol—four times the acceptable level. She was immediately put on a strict fat-free diet. This helped bring her cholesterol down. Though still above the acceptable level, it was far better than the original diagnosis. This episode really made Rivi recognize the importance of natural, healthy foods. Determined to stick to a healthier diet, but craving the baked goods she always enjoyed, Rivi set out to create a healthy cookie that would work for her diet and her taste buds.

All of this took place right before Rivi, her husband, and their three children moved to Canada in 1989. Not yet fluent in English, she found her place first in working as a supply teacher in Jewish day schools, teaching both Hebrew and Gym. Around the same time, she began experimenting with baking, testing out different ingredients and tastes. This led to her first laboratory tested fat-free cookie, her classic Oats & Raisin. By 1996, Rivi took the next step and started her own business, Rivi’s Guilt Free Cookies.

She reminisces about the first years, “Our first customer was the Second Cup at our local mall, the Promenade. I have always found it amusing that our first buyer didn’t even try the cookies before agreeing to display and sell them. ‘I don’t like cookies,’ the buyer said, ‘the customer will decide…’ and, to her credit, they did!”

“For the first year, we were affectionately described and sold as the ‘illegal cookies’, since we were not yet registered by Second Cup’s head office. We had to find a way to sell to only a handful of locations to start, as we were not quite ready to supply them all. We decided that becoming the kosher option for Second Cup was our window. We were fortunate to be able to share Abe Levy’s kitchen and eventually moved to our own kitchen with our own COR number. By that time, we decided to go further and carry the Pas Yisroel designation too.”

When Rivi looks back at where she came from and where she is today, she credits her Israeli upbringing for providing her with the tenacity needed to start and run her own business. As she says, “From a very young age, my parents always gave me a lot of independence. Though I was never a baker, I was always independent in the way I worked. I never worked for others, but never thought I would do this!”

When asked for advice she would give to future entrepreneurs, she says, “You need to know your skills. Find out what you’re good at, see what the market needs, and then go for it! When you have the ability, the edge, and the skills to do something, you need to find the places that give you the opportunity to use those skills. Those skills with a bit of luck will take you far.” “But,” she notes, “I can’t describe enough how difficult it is to start a business, especially in a new country where you don’t have the support that you had before. You have to be ready to take that journey. You need to find a mentor and see what they’ve gone through before you do it on your own.”

Not only has Rivi’s Guilt Free Cookies been in operation for over 20 years now, but Rivi’s son, Omri, has joined the company as well. With Omri’s help in finance and distribution, the business has grown from the famous Oats & Raisin cookie to a whole line of cookies and granola; all made without butter, margarine, oil, or artificial additives and are all GMO free. Rivi makes sure to add, “We are nut free, dairy free, sesame free, and proudly kosher and Pas Yisroel.”

They also have a new cookie coming soon which will be sugar free, fat free, grain free and vegan. Rivi says, “People tell me ‘We see your cookies everywhere!’, and I answer, “Almost. There’s still so much to do.” She hopes her new line of cookies will help take the business to the next level. As she continues, “I don’t know the end of the story. You never know where it’s going to go.”