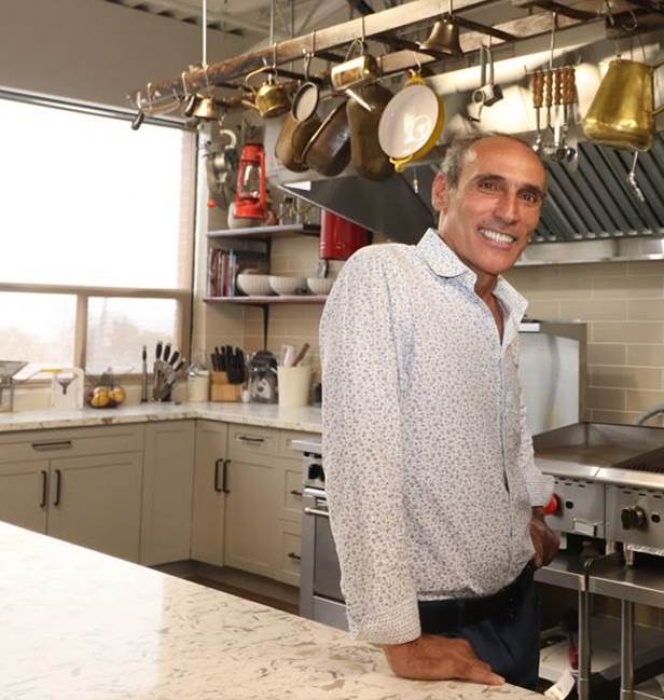 When Tzvi (Steve) Kidron came to Canada from Israel, he came with nothing. Now years later, together with Alexandra Pelts, he is the owner of Kitchen24, a huge, affordable, shared kitchen rental space in North York – fully equipped with cold storage, cooking tools, and equipment. This is a place where culinary enthusiasts of all walks of life can develop start-up food companies, expand their catering businesses, host culinary demonstrations, or try out new recipes for their restaurants without taking up valuable kitchen space of their own, all in a stable, comfortable environment that comes complete with an event room. Tzvi has also set up two large kosher kitchens in the facility – dairy and meat.

Tzvi grew up in Migdal HaEmek, a small city located in Israel’s lower Galilee. As a young adult, he worked in the shuk, selling fruits, vegetables, and candy. But in 1989, at the age of 22, Tzvi, who dubs himself an unconventional thinker, decided to move to Canada.

“I just wanted something else,” he says. “I thought, ‘I have a potential’, and in my hometown there weren’t many options.”

So he arrived in Canada as many Israelis do – in the middle of the winter in a light jacket, with a total of $100 in his pocket.

“I was freezing to death,” he says. “I didn’t even have something that could keep me warm.”

Tzvi didn’t know anyone when he arrived, but he figured that his best shot was a large Jewish community, so he headed for Toronto. Unable to even read the job ads in English, he started walking around looking for work.

“I remember one time early on I was so hungry that I came into a falafel place, and I said, ‘Give me a falafel, and I’ll wash the dishes for you’. And that was the beginning of me getting to know people here.”

“I didn’t know anyone who could give me a job,” he says, “and I didn’t speak the language. I had a period of time that I was homeless, but I always believed in myself and I believed in hard work, so I pushed my personal pain to the side and just kept on going.”

And that was when Tzvi noticed a cultural difference that, for many, had fallen between the cracks.

“I then recognized that in North America, it’s not like Israel; people are throwing out good stuff.

“So I started collecting all kinds of junk and reselling it, sometimes at the scrapyard, and slowly, slowly I found my way. I saw potential that no one realized. Where people see garbage, I see money.”

“To get out of the street,” he says, “I got to know Rabbi Shalom Revah of Beth Medrash Bar Yochai. He heard my story – that I was sleeping in the street – and he was the person to help me and to give me a bed to sleep in. Little by little I started getting myself together to achieve my potential.

Once Tzvi was able to sleep in a bed consistently, he started saving up and bought a van. This enabled him to start collecting even more scrap for resale. He then expanded into interior demolition and removal – getting rid of items for people and bringing them to the dump.

“One day, I came to a company that had called me to dump some food. I looked at the food that I had to dispose of and it hurt me – as someone who had been homeless – that I was throwing out good food.”

“So the next time they called me, I said to them, ‘You currently pay me ten cents to dispose of this food. If you handle it properly so it won’t be tainted, I’ll pay you ten cents to take it off your hands. You’ll be making 20 cents.’ They liked the offer, so I started preparing myself to receive that food and to resell it to mom-and-pop shops.”

“From there, I opened my own warehouse with a walk-in cooler but I eventually realized that the quantity that was coming in was way too much. In order to dispose of it, I had to cook and bake the food into hot meals. I was taking lots of spots in the flea market to sell the food, and I even had a location from which I was selling the food for low prices just to get rid of it, because everything I made was a profit.”

Then, one day, a regular customer of his that had been buying frozen foods for their catering business asked him for some help. They asked if he would allow them to work in his kitchen to cater an event.

“I was amazed,” Tzvi says. “How can it be that a chef needs my help? So I said, ‘I don’t mind helping you. No one gave me a chance; I had to create my own chance. But I’ve always believed in helping others’.”

According to Rabbi Revah, “Tzvi was always very helpful; he likes to help people. If somebody needed something, he was there for them. He was sociable and very nice about it. He’s very kind.”

And this got Tzvi thinking: What if there are others who want to cook commercially but don’t have the space to do so?

So he put an ad on Kijiji, and by the end of the week, his kitchen was booked up for the year. By the end of the month, he had interviewed 320 people who wanted to use his facility, but most of them would never fit into his current location.

“With each one I interviewed, I tried to understand their needs,” he recalls. “And before I knew it, I had a business plan that I didn’t even aim to.”

Clearly this was something the city needed.

Tzvi did research all over Canada, and he found nothing that was quite like what he had in mind.

“I made a blueprint that didn’t exist,” he says. “I built a state-of-the-art facility as a complete environment that can cover anything someone wants to do in the food industry.”

Most of the facility is a huge, open concept room divided by partitions, allowing each business to rent as much or as little of the facility as they would like. The two kosher kitchens are totally separate, complete with their own equipment, refrigerators, and, of course, mashgichim.

“When customers come there,” says COR Managing Director, Richard Rabkin, “our mashgiach will be there. The mashgiach opens up the kitchens, takes a look at all the ingredients that you’re using in your process, will turn on the ovens if necessary, and, after you package it, you get official COR stickers that say that your products are under COR.”

“I always wanted to do something for the community,” Tzvi says. After all, it was someone from the community who reached out to help him when no one else would.

“I need to give a special thanks to Rabbi Revah. I got to learn a lot with him through his shiurim. I’m not Orthodox, but I know my prayers, halacha, holidays, and more. I learned all of that from just being around Rabbi Revah.”

He also credits COR for being easy to work with: “I was amazed when I contacted them with my concept and offered them something that nobody had ever offered to help the community, they understood that we wanted to help the Jewish community and were very supportive from the beginning. I have a bond with COR – it’s like a partnership to help the community. I believe that COR recognizes what’s missing in the market.”

And that’s not the only way his company is giving back. Kitchen24 hosted its first soup kitchen for the winter holidays this year:

“When it comes to the non-Jewish community, I hosted a Thanksgiving dinner for about 60 people, and, on December 25th, we had 2,700 people. I had 200 volunteers that were cooking and serving. Hopefully I will soon have my mitbach chesed (kosher food bank), which will provide hot meals to the kosher community.

“And in between that,” he says, “I’m putting together a program for my members that all the leftover food they have, and everyone who cooks commercially has a little bit of leftovers, should be wrapped up and prepped properly so we can send it out as a meal to a community centre or the homeless.”

Each one of his members, he points out, routinely has at least ten percent of their food left over (which, he points out, is maaser). If he multiplies that by all of the companies in his facility, he can be feeding hundreds on a daily basis.

“I feel like I’m blessed,” he says, “that I can feed all those people when I used to dig out food from the garbage. With hard work, determination, and by looking where no one else does, you can make anything of yourself. But you can’t forget to look back at where you came from.”