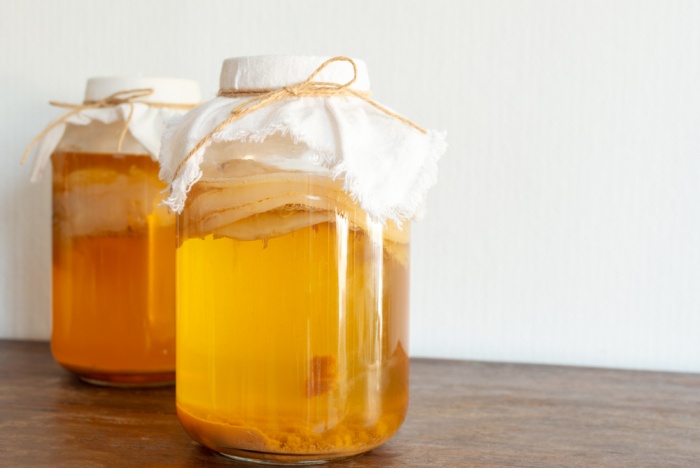 What do cheese, sourdough, kombucha, and kefir all have in common?

What do cheese, sourdough, kombucha, and kefir all have in common? Each of these products is made using a starter culture to help with the fermentation process. Starter cultures are used for many reasons in commercial food production such as to enhance flavour and texture, as a preservative, and to keep consistency in production. Cultures refer to microorganisms, like yeast, bacteria, or fungi, which are grown as a species of their own in order to be used in the fermentation process.1 A culture is considered kosher if the item on which the culture was grown was itself kosher. Although in most cases the starter cultures used are kosher certified products, what if a company wants to introduce a new starter from a not kosher certified source to adjust their product’s composition? When and under what circumstances can this be permitted?

Rennet is used in cheese production as a starter. It acts as a maamid, an ingredient that affects the composition of the product, by enabling the coagulation process. The Shulchan Aruch rules that if one makes cheese with non-kosher rennet the cheese is deemed not kosher. This is true even if only a minute amount was used, because an ingredient which is assur and acted as a maamid is not nullified even in one thousand. However, the Rama says that if both an issur and heter acted together to effect the change (zeh vizeh gorem) then it can be batul.2 The Taz adds that this principle is only true if the issur cannot effect the desired change on its own.3 However, Darchei Teshuva brings the Ran that says that one may not l’chatchila use this heter to nullify the non-kosher maamid even when using a heter maamid along with the issur.4 This severely limits how the heter of using a non-kosher maamid along with the kosher one can be applied, since a Jew cannot use it l’chatchila, and it would only be permitted after the fact.

The Beis Yosef teaches the idea that if a maamid was already batul three times, one may go ahead and use it l’chatchila.5 The source for this is found in a Tosefta that permits purchasing sourdough bread from kutim three weeks after Pesach even though they didn’t sell their chometz before Pesach. Since the sourdough starter from the bread made on Pesach was already nullified three times due to their three weekly bakings, it is permitted to purchase their bread.6 So too, the Beis Yosef adduces that kosher milk that was fermented with non-kosher milk is permitted after the fact to use once the non-kosher milk was used to ferment in kosher milk three times.

Some years ago COR was approached to certify an industrial bakery that made sourdough breads. Their family sourdough was always made using their previous breads as a starter. When asked about the source of the original sourdough, they responded with a story. When they came from USSR occupied Poland and started making bread in Canada, they weren’t satisfied with the taste and decided that they needed to get some sourdough from the family bakery back home. In order to get the sourdough, they had to wait until a family member emigrated and brought some live sourdough from which they used to make their breads. Even though the origins of the sourdough weren’t certain, we were able to certify their breads based on the concept that the sourdough had been used more than three times in a kosher recipe and was therefore permitted.

There is much discussion in the poskim that limits the heter of a maamid that was batul three times.7 Mogen Avraham in hilchos Pesach states that if mead from honey was fermented using sediment from chometz beer, then all subsequent fermentation of mead using third and fourth generations of that sediment are forbidden on Pesach.8 Mekor Chaim asks how this conforms to the rule that zeh v’zeh gorem mutar?9 Orech HaShulchan explains that since this fermentation was from a totally chometz source, it remains forbidden forever.10 Only when the fermentation occurs as a dual effort of heter and issur can it be permitted after three times.11

SCOBY is another interesting starter which is used in the production of kombucha, a fermented tea drink with a fizzy, slightly sour taste. SCOBY, Symbiotic Culture Of Bacteria and Yeast, is a gelatinous material that sits on top of the tea brew and aids in the fermentation process.12 Companies will often source their starter from an existing SCOBY and continuously take pieces from the original SCOBY to brew their kombucha batches. SCOBY is therefore used differently than most other starters, since a piece from the original SCOBY is taken each time instead of reusing the same starter over and over again. Since typical starters use the entire culture to ferment the product, it causes the original non-kosher starter to eventually get diluted to the point that it is considered halachically insignificant. With SCOBY, a piece from the original starter is used and therefore never undergoes bitul. If the SCOBY came from a non-kosher source, it is very likely that the original SCOBY remained more or less intact and just grew larger, making it impossible to apply the heter.

So, how do we certify kosher kombucha that was made using SCOBY? We have found that SCOBY is traditionally grown from tea and not from kosher sensitive items. We therefore do not certify kombucha products that use a non-kosher starter. Instead, we independently verify that the original starter came from a kosher source.

Kefir, a fermented yogurt drink, uses a kefir grain starter which is a type of SCOBY. The traditional kefir grain used as the starter is likely from a not kosher source. Since this starter is used in a similar fashion to the SCOBY for kombucha, with pieces from the ever growing original starter used in production, it wouldn’t be possible to produce kosher kefir from that source. Instead, kosher kefir is made with commercially produced starters grown on a kosher source.

In most cases, the starter cultures used in commercial production must be kosher certified. A non-certified culture could have two main issues: the material in which the starter was diluted and the growth media could both be non-kosher. Under some circumstances, when the original growth media was a mixture of kosher and non-kosher, it is possible to have the non-Jewish company further grow the culture three times on kosher media and then use the final new growth in kosher food production. The exact details are quite nuanced and this can only be done with halachic direction on a case by case basis.

Due to the complexities, it is not advisable to attempt to apply the heter of when one can use a non-kosher starter at home. Introducing a non-kosher ingredient into your kitchen can become problematic and should be avoided. But don’t worry, there are many kosher certified starter cultures available on the market so you can do your own fermenting at home.

12 Dana, Jackie. Kombucha Explained: Why You Should Drink This Fermented Tea. https://learn.kegerator.com/what-is-kombucha/