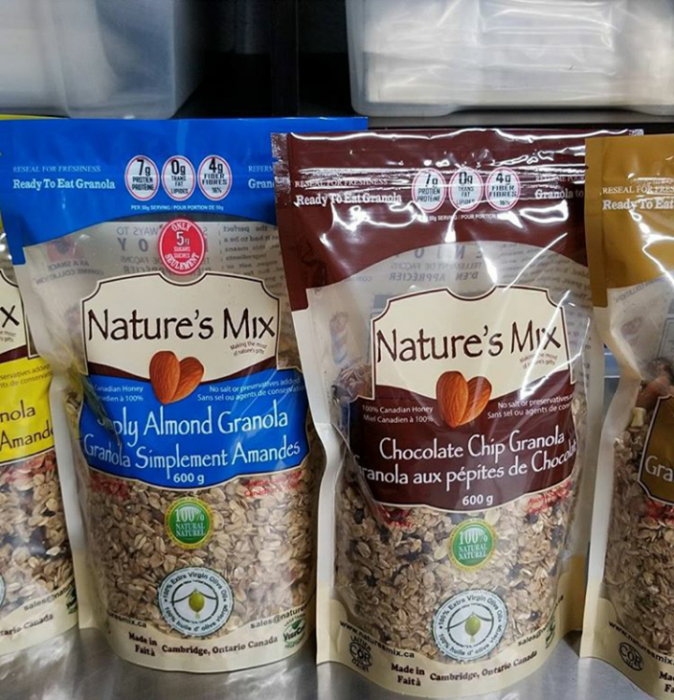 The year was 2011, and Waterloo father John Gaya had just lost his IT job due to layoffs. His wife, Crystal, who was a homemaker at the time, decided to sell her homemade granola at the local farmers’ market to earn an extra couple of dollars.

“My wife is an excellent cook,” John says, “and her granola was always a hit with our family and friends.”

It was the kind where people sputter, “You should sell this!” between mouthfuls.

So she did. Crystal hadn’t found any granola in the health markets that were made with ingredients that were as healthy as the ones she was using, yet tasted as good. The plan, the couple figured, was to let shoppers taste the granola and see if people who were not Crystal’s family and friends would recommend she sell it too. Basically, all they wanted was some feedback as to whether this would hypothetically be a viable business, and they figured that the farmers’ market – where people are always on the lookout for healthy foods – would be a good testing ground.

She sold out on day one. The only thing that customers were upset about was that she hadn’t brought enough. John and Crystal had to run back to the farmers’ market the next week with more. They continued to sell out every week, and the feedback they received from their customers was so motivating they decided to turn this into an actual business.

It turns out that even in a bad economy, health food sells—especially when it tastes good. Their granola is made from locally-sourced oats, honey, and maple syrup, contains no added sugar, and is one of the few companies that uses olive oil rather than the canola and other oils used by some manufacturers. And it helped that all of the granola was made manually – as opposed to machine made – giving it a fresh, home-baked taste.

From there the business exploded, faster than the couple could keep up with. Huge orders came in that were very hard to meet on time. Sure, they were great at making the granola, but the packaging process, especially for large volumes, was very time-consuming. No one gets into this job because they’re great at packaging loose granola by hand. It’s a whole process: scooping the granola in, making sure it weighs what the package says it does, pouring some out, pouring some back in, sealing it…

So they had a dilemma. In order to increase the size of their business, they would have to take large orders, but the only way to do so was to invest in a packaging machine, which was far too costly for a fledgling business that was growing faster than they could keep up with. But if they wouldn’t have the machine, they’d have to package by hand, and wouldn’t be able to fill the large orders they were receiving in time, and therefore not be able to earn the money to pay for a packaging machine. It was a vicious cycle.

So they decided to apply to the Ontario government funding program for assistance in purchasing the machines they needed. Their application was approved, and with that, they were able to grow. What started with one flavour, honey almond, at one farmers’ market soon became eight flavors at over 170 stores across Ontario.

One thing that was not a challenge was making their products kosher.

“It was not a hard decision to make our products COR certified,” John says. “Everything we use in our granola is already natural and kosher.” They didn’t actually have to change anything. John adds that getting the certification was important because even non-kosher consumers see the COR symbol as an indication of a quality product.

John counts the COR as easier to work with than he expected, what with the COR’s “CORporate Kosher” online kosher-management program, which he found very intuitive and easy to use. The manufacturers simply enter the ingredients that they’re putting into a new product, or they update an entry if they suddenly change suppliers for an existing product, the COR verifies it, and the system provides them with a kosher certificate. Then, when the Rabbi performs his inspection of the plant, he just has to verify that they’re using the ingredients that are in the CORporate Kosher database, all of which have already been verified at COR headquarters.

What John and Crystal learned from this whole experience, though, is that sometimes the key to your livelihood lies in a talent you weren’t expecting to monetize. Chances are you’re good at more than one thing. Today might have been rough, but tomorrow’s another day, and all you need is a healthy start.

They also learned that if a homemaker decided to start charging for what she does, she could probably start an empire.