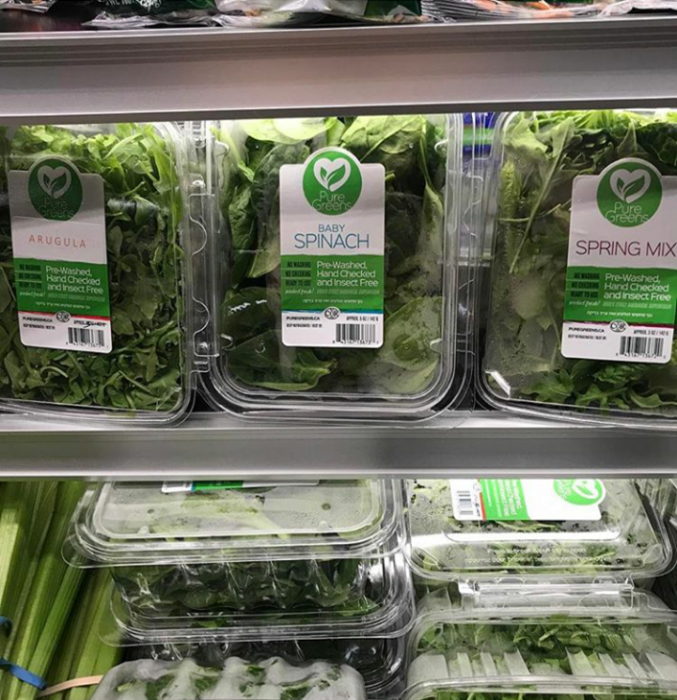 This is a question we used to ask as children, before we became adults who love salad. When it comes to vegetables, bugs are the terror of kosher consumers and entomophobes everywhere—especially ones who are trying to eat healthy.

For years, Canadian Jews had very few options for obtaining fresh, pre-checked, bug-free produce. It’s not hard to get frozen vegetables around here, but what if you just want a salad?

Of course there is vacuum-sealed Iceberg and Romaine, but, up until recently, if you wanted fresh lettuce that you knew was properly checked by a mashgiach, you would have to go to a COR certified restaurant or wedding hall, and those places aren’t great for dieting. Sure, you could check your vegetables yourself, if you wanted to go through the whole process every time you wanted a healthy snack, but there was always the fear that maybe you didn’t do it properly.

But then last year, Toronto resident and cookbook author, Estee Gestetner, decided to do something about it. Estee runs Kosherco, a business which creates food products that she feels are a missing need, such as sauces and healthy snacks; and she felt that this was definitely a missing need.

Estee, who often summers in Upstate New York, had occasionally journeyed to the large Jewish municipalities in the States and always found herself drooling over the gorgeous pre-packaged, pre-checked, certified vegetables. So she said, “Why can’t Toronto have something like this?”

“Why can’t Toronto have something like this?” she asked Rabbi Tsvi Heber, COR’s Director of Community Kosher.

And Rabbi Heber said, “What a great idea! Go for it!”

COR offered to help Estee get the business up and running and that’s how Pure Greens was born. “They were a lot of help,” Estee says. “All the mashgichim and staff of the COR have been very supportive, because they’re all about improving the kashrus of the city.”

COR even advised her in training her bug-checkers. “We actually sent two mashgichim to the Seasons superstore in New York to see how they do the washing there,” she says.

Estee had to build her own kitchen for this, including a custom-made sink with 3 compartments for the various stages of soaking and checking, as well as 3 separate drains.

One big difference between checking at home and getting pre-checked produce, she says, is that even if you really know what you’re doing, each leaf of pre-checked greens is washed under an extremely high-pressure stream of water – higher than what you have at home.

“A lot of people don’t realize how difficult it is to check produce,” she points out.

Pure Greens’ business model is to buy the produce wholesale, wash it, check it, package it, and have it on store shelves, all within 24 hours, thus guaranteeing the best-tasting vegetables with the longest shelf life possible. They currently ship their produce all over Toronto (Hermes, Kosher City, Kosher Gourmet, Savours, and Sobeys North), and even to Montreal (in The Fooderie Market). The company checks cauliflower, whole Romaine leaves, baby kale (seasonally), baby spinach, arugula, purple cauliflower, and, on occasion, herbs. They’re also thinking of branching into strawberries in the spring, and are constantly taking suggestions for more products. They also do some work for caterers.

“A lot of commercial kitchens are tight on space,” Estee points out, “and washing and drying produce makes a big mess. So outsourcing the washing of some vegetables to us is a great option for them.”

As for her biggest challenges?

“Money,” says her son, Lippy, who, at 17, is the company’s CFO. Estee did not get into vegetables to make money, but to do a service for the community.

“Financially, it’s not great,” she says. “I did it for the klal, and the reaction from the klal so far has been tremendous.”

But she does note two major challenges:

Her second issue is price fluctuations. Pure Greens was started as a service to the community, and not to make money (“although a little bit of money would be nice,” she jokes, her son clearing his throat in the background), and they try to keep the prices down as much as possible. But, they buy their produce from the market, and, as anyone who tries to eat healthy knows, produce prices fluctuate wildly—especially when you’re buying a metric ton of it. “Some weeks Romaine lettuce will cost us $20 a case,” she says, “and some weeks it will cost $60.” The same with cauliflower, yet she can’t just keep bringing her own prices up and down like that – it doesn’t work.

“The first week the business started,” she notes, “Romaine was $80. But we can’t say, let’s not wash Romaine lettuce this week. Then everyone asks, ‘Where’s the Romaine?’”

And what about Pesach?

According to Estee, she should probably have given up on this whole thing already if not for all the enthusiasm from the community. That’s what gets her through the day, she says – the positive feedback.

“I really feel very privileged to have started something that affects so many people in such a positive way. It really is way more challenging than I thought. If not for all this enthusiasm from the people, and I’ve even had rabbis call and say how much good we’re doing for the city, I would have given up months ago. People hug me in the street and tell, ‘You’ve changed my life. Now every time I buy vegetables, I think of you.’”