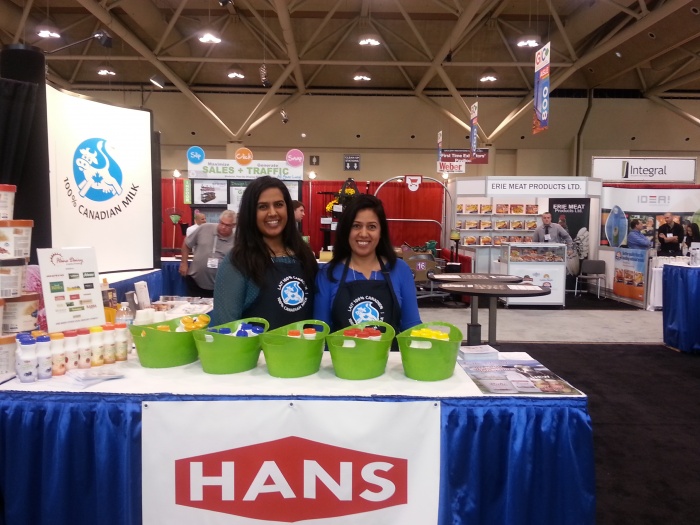 What do you get when you bring together an engineer, nurse, and 2 businesswomen? A dairy company, of course! Though it may seem like an odd combination, those are the people behind Hans Dairy, a family owned company aimed at providing authentic South Asian dairy products to the Canadian public, now in its 22nd year of operation.

Gurdarshan and Joginder Hans decided to immigrate with their family to Canada in 1979. Both natives of India and having spent time in Scotland and England, they decided to move to Woodstock, Ontario to find new opportunities. Initially, they had a hard time adjusting, perhaps because Woodstock was not as multicultural as it is today, so they moved to the Greater Toronto Area. At first, they had difficulty finding work. Though Gurdarshan was trained as an engineer and had worked in quality assurance and aerospace engineering and Joginder was an experienced nurse, neither was able to transfer their skill set to jobs in Canada. Their degrees weren’t accepted and both ended up working in factories.

After some time, Gurdarshan decided he would go back to school so that he could upgrade his engineering skills and apply for jobs in his field. After taking some courses, Gurdarshan was able to get a job at an aerospace company. Unfortunately, the company went on strike. As his daughter, Sarab, explains, “After the company was on strike for about 9 months, my father started going stir crazy. He decided that instead of sitting around, he would start up his own business with the skills and knowledge he had. That led him to start a milk distribution company. He acquired trucks and began supplying to various small mom and pop South Asian stores across the GTA. This started in the late 90s when there were a lot of smaller dairies in rural areas, and he would arrange for their distribution.”

Soon after, Gurdarshan realized that there was a gap in the dairy products that the South Asian community was looking for. Sarab explains, “South Asians were used to a different style of yogurt, a different taste profile, and different cheeses that weren’t being offered at the time. As my father is not one who sits around when he sees an opportunity, he decided he would start a dairy himself.”

But in order to start a dairy, he needed a license. The government was very strict on how many licenses would be issued, and Gurdarshan needed to present a case as to why the existing dairies weren’t filling the market and how his new company would. After 3 years of trying, he finally received his license and began building the dairy.

Sarab explains, “When you come from a different country, people tend to have an entrepreneurial spirit and my father clearly had that. He started the business in his 60s, so it was really a second career for him. Besides for my father having a process background from his engineering work, both of my parents came from rural backgrounds and were able to apply that knowledge to building the dairy.”

Initially, it was very difficult to get the products into stores. As Sarab says, “People didn’t recognize our products. The market was controlled by the bigger companies, and store owners didn’t feel the need to carry another milk or yogurt product. The Canadian demographic was changing to become more ethnic, but people didn’t understand how it affected food. They didn’t recognize the uniqueness and necessity of carrying these products.”

Gurdarshan wasn’t deterred and decided that if he couldn’t get the products into the stores, he would get the products to the customers. So, they began distributing the first South Asian culture products on the market by home delivery. They had their own trucks and would deliver flyers to announce when they would be in the area so people could buy straight off the truck. Sarab continues, “Once the trucks began coming more often, people became more receptive to the new offerings. People liked the products so much that they began asking store owners to carry them.”

When asked what Hans Dairy has to offer that’s different from other dairies, Sarab explains, “South Asians are huge consumers of dairy and dairy products. I remember when we moved to Canada, how my mother would make all our yogurt and cheeses at home. It’s very common for South Asians to make their own dairy products, especially if they’re a large family. So what we’re competing with is not so much other companies, but the consumer themselves. We need to make our products taste like what they would make at home.” Hans Dairy tailor makes their products for this palate, but they don’t augment it. It’s not a sped up process and products are made with real fruit as opposed to flavourings. Their main product lines are cultured products such as the set in cup and drinkable yogurts as well as rice pudding and whipped butter.

Hans Dairy was run for many years by Gurdarshan and his wife, Joginder, until Gurdarshan decided it was time to retire. So, he called up his daughter, Sarab, who was working as an investment banker in New York and asked if she wanted the business. She took him up on his offer and moved back to Toronto the next year to take over. After running the business for a little while she was getting burnt out and wanted someone else to share the workload. So, she asked her sister, Mandeep, to join her in the business. Her sister was working in Business Development at Rogers but decided to come and work with her sister instead.

The business continued to flourish. So much so that they were able to build a new facility in 2015. Shortly after, they decided it was time to become COR certified. Since they had begun co-packing once they moved to their new

When asked what the plans for the future are, Sarab says, “Beside our facility we have an entire acre of land which we plan to use to build an extension to the facility. We’re also looking into providing single serve offerings for our yogurts and different flavours of our rice puddings.”

She’s following closely in her father’s footsteps, tapping into the open market space and providing new products to suit people’s needs. Gurdarshan taught them that anything can be done with a little ingenuity and a lot of willpower and today, Sarab and Mandeep are living the life their parents hoped for—running a successful business in North America firmly rooted in their South Asian traditions.