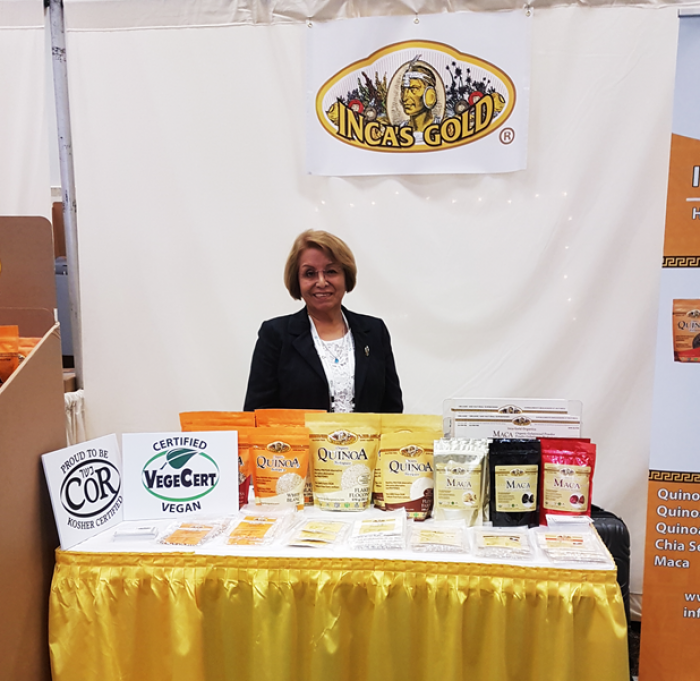 Like many of us, Juana Garcia always dreamed of starting her own business, but, unlike many, she actually turned that dream into reality. Born and raised in the Peruvian Andes, in the remote city of Tarma, she didn’t have the type of upbringing that one might think would produce a successful entrepreneur. As she explains, “As an orphan from the age of 4, I had to grow up really fast, taking care of both my younger brother and cousin, as my aunt and uncle did not have the time to really take care of us. Even after we moved to Lima, the capital of Peru, when I was 8 years old, I still had to take the initiative in terms of securing an education for myself, which persisted until university.”

After moving to Lima, where she completed high school and university, ultimately becoming a fully-fledged Industrial Engineer, Juana had to face another hurdle—moving to Canada. Not only would she need to adjust to another country, but now she had to deal with another language too. Knowing that she would need a strong command of English if she ever hoped of starting her business and knowing that her English just was not up to snuff, she decided to do something about it. She began studying the TOEFL exam materials and intensively listening to audio cassettes on her own. Through her persistence, she gained a strong command of English within 6 months of her arrival. Now, she thought, she would have the skills she needed to start her own business.

Life, on the other hand, had other plans. Once she became a single mother to her child with a disability, Juana decided that getting a stable 9 to 5 job would be the more sensible thing to do. So, she took a job working for the federal government and put her dreams of starting a business on the backburner. She worked for the government for 16 years until, in 2011, she decided it was finally time to move on and start her own business. And ironically, it was her son’s gluten-intolerance that was the impetus to get her going.

Juana’s son was having a hard time finding quality gluten-free food options in Canada. So, she decided that she would take matters into her own hands and start Inca Gold Organics, a food importing business that would focus on nutritious, gluten-free foods such as quinoa, chia, and maca. These were foods that she was already familiar with from her childhood in Peru. As she says, “I was readily familiar with where these products are grown, as well as the local culture and customs, and was able to develop relationships much easier in South America than a native Canadian may otherwise have been.”

But it wasn’t all smooth sailing. As Juana recounts, “I was offering products that very few people in Canada knew about at the time, which made gaining momentum difficult. Also, as a female entrepreneur in the primarily male-dominated food importing business, it was hard to gain the respect of prospective supplier partners in South America.” But Juana persisted and her passion coupled with her knowledge of her products eventually helped her gain traction with clients. The industry gradually began to understand the value of South American superfoods, helping her business take off.

To grow her business further, Juana felt that COR certification would be the next step. She says, “As a company that prides ourselves on offering high quality superfoods, we felt a partnership with COR was a natural choice to highlight the quality of our products, as COR kosher certification is, indelibly, a mark that gives consumers confidence that a product meets the highest safety and quality standards available. The COR kosher certification also grants access to markets with a high demand and appetite for quality superfood products.”

When asked what makes her business different, Juana explains that Inca Gold Organics works directly with the farmers to source superfoods from South America to sell to the North American market at affordable prices. They service processors, manufacturers, stores, and end consumers. Their business model is unique compared to other importers. Juana explains, “Inca Gold Organics’ biggest differentiator is how closely we work with our farmer-suppliers. A lot of importers work with distributors or third parties that source quinoa from a number of different farms, so the quality can vary greatly, and the farmers tend to get a smaller cut. In our model, we make sure that we work with the farmers, so we know their quality control processes inside and out, and build long term relationships with them that allow us to offer their products at a fair price while ensuring the farmers make a suitable margin.”

In the end, it was Juana’s South American background and unconventional upbringing that ultimately brought her the success that is Inca Gold Organics today. Growing up around the South American superfoods helped her tap into an unmet market and build connections with suppliers in her home town. Not only did she overcome many challenges along the way, but used them to her advantage to make her dream her reality.