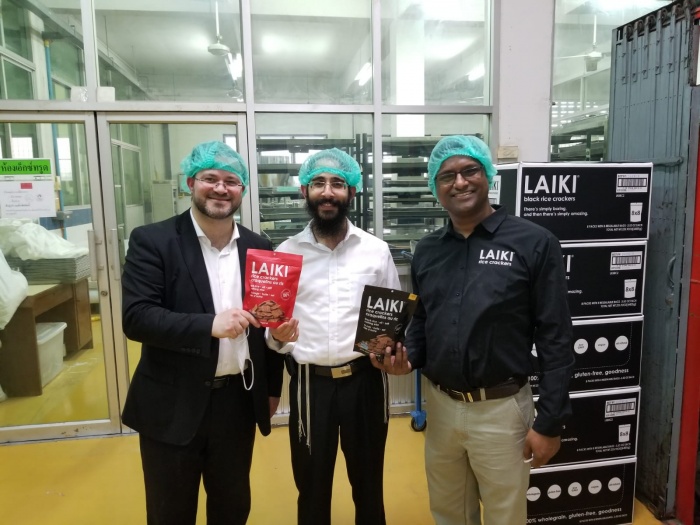 Imagine, you go to the grocery store and all of the milk is black. The shock that you might experience would be similar to the reaction that Pradeep Akkunoor, owner of Laiki Rice Crackers, had the first time he saw black rice. Being a life-long rice eater growing up in India, Pradeep was intrigued when he was exposed to the different colours of rice on his first trip to Thailand. Instead of shrugging off the experience, he decided to find out more. Once he realized that the colour in the rice comes from antioxidants that carry various health benefits, he decided it was time to bring black rice to the masses. The only question was, how?

At first he thought that he would sell the rice itself, but soon realized that wouldn’t be so simple. Consumers weren’t familiar with the product and would need a lot of education about the rice and how to cook it before they would be willing to buy it. So, he set out to create a snack from black rice that would be easy for consumers to eat. As Pradeep says, “I wanted to see how the taste and texture of the black rice would work in a snack, so I worked with some partners to create a base for it. In the end, the base tasted so good that we didn’t even have to add anything!”

Creating a great tasting snack was step one; he then needed to figure out how to sell it. As he explains, “I wanted to start the company, but didn’t have a space to run it out of. So, when my sister, Pratima, bought a house I turned to her and exclaimed, ‘we now have an office!’ She agreed, and said she would start the business with me.”

“We definitely had some challenges along the way,” Pradeep continues. “When running a small business with multinational operations, the most challenging part is managing the cash needs of the company. Fortunately, we were able to connect with outside investors which helped us financially. It also gave us an opportunity to learn from their business experiences.”

Pradeep says that his multicultural upbringing played an important role in the success of his business. Growing up with a father in the Indian air force, he had the opportunity to live in multiple cities in India and was exposed to many different types of people. He then worked for a couple of US companies that had subsidiaries in India, which gave him an understanding of the American work culture. He has also travelled to over 10 countries and lived in different parts of the world for schooling and work. “This exposure,” he says, “has given me the insights into and ability to work across a multinational and multicultural environment. I would say that I’m a local in multiple places. I have also learned and speak multiple languages.” When Pradeep came to Thailand he had no knowledge of the Thai languages. Today, he can speak, read, and write Thai. He says, “The ability to pick up new languages helps one assimilate into the different cultures and work well with various suppler partners and customers.”

This multiculturalism has become part of the company itself. As he says, “Diversity is an automatic outcome when you hire the best people. That’s one thing that’s special about Laiki. We’re really proud of the fact that we have people from many different nationalities and religions working at our company.”

Today, Laiki Rice Crackers is a multinational company with operations in Thailand, Vancouver, and California with sales in Canada, United States, Hong Kong, and Thailand. Their classic, all natural black and red rice crackers still only contain the original 3 ingredients: rice, oil, and salt. They have also just launched 2 new flavours—vegan cheddar and black pepper. Both are all natural and certified kosher and vegan. When asked why kosher was so important for their products Pradeep explains, “The demand came from the consumers when we launched. We had people asking if it’s kosher and we’d say yes, all the ingredients are, and they’d say, well, where’s the certification?” Pradeep continues, “Only when we started with kosher certification did we realize that there are a lot of other rules besides the ingredients themselves being kosher. We needed to work with someone who had the knowledge of all the kosher rules in order to certify the products.”

When asked why they went with COR certification, Pradeep answers, “It wasn’t a question as to why COR. It was more, why wouldn’t we go with COR? We had great Canadian partners who reached out to us right away with interest. We spoke with one of the COR staff members at the Winter Fancy Food Show and everything went smoothly from there. We saw that COR was well respected and recognized in the industry as well as by consumers. Besides for kosher, COR had also just launched their VegeCert vegan certification which was a real added bonus for us so we could show consumers our products were also certified vegan.”

Pradeep has high hopes for the future of Laiki. As he puts is, “We have a very loyal customer base. Once people discover our crackers and like them, there’s just no reason not to eat them again. They’re simple, better for you, and taste good.” They are the only rice cracker to win the SOFI award for outstanding food innovation and they hope to continue moving up. When reflecting back, Pradeep says, “I never planned for the product to come out this way, but that’s what happens with a lot of businesses. There’s an element of serendipity and luck.” Never underestimate a strange looking product you see in the supermarket—it may just turn you into the owner of a multinational company.